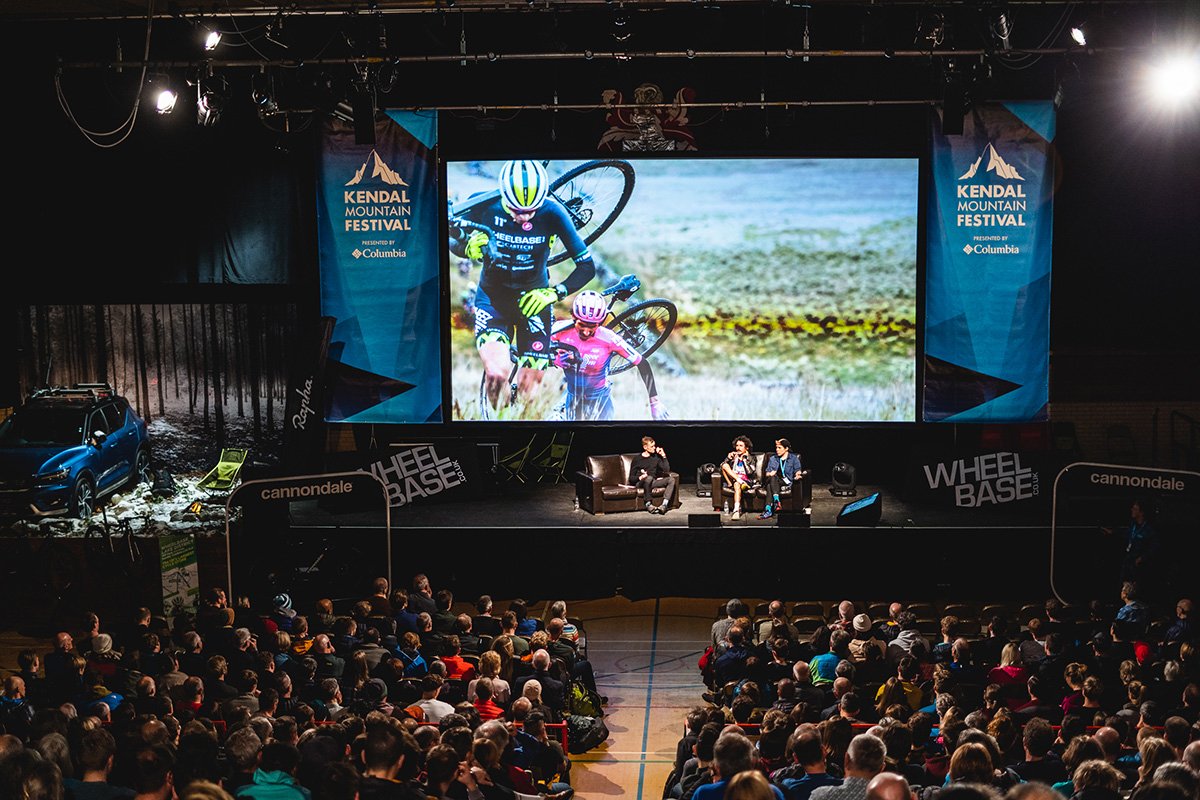 Kendal Mountain Festival delivered another inspiring celebration of films, talks and events over this past weekend.

We were delighted to be a part of so many excellent events as a supporter of the festival and this was our busiest year yet.

Our festival kicked off in style on Friday evening with the Trek Bike Night presented by Rob Warner and Tracy Moseley. Kendal Leisure Centre was packed full of MTB fans who were treated to a collection of exhilarating films and special guest speakers. Father and son Rich and Tom Seipp got the evening underway with tales from their incredible adventure bikepacking The Great Divide which runs from Canada to the Mexican border, covering over 3000 miles of off-road terrain. There was a stacked lineup of Trek Factory Racing athletes on stage for the evening, taking questions from the presenters and offering insights into their 2019 racing seasons. Katy Winton, Evie Richards and Reece Wilson were in Kendal for Bike Night and the World Premiere of their film’Going In’, a year in the life of the Trek Factory Racing team.

We were up early Saturday morning to team up with Kendal Cycle Club and Rapha for the KMF club ride to Grange. There were 85 keen roadies who arrived for the ride and headed out from Kendal Leisure Centre on mostly flat roads towards Grange and returned in time for the afternoon Rapha Road Bike session.

The Leisure Centre was once again the venue for the afternoon Road Bike Session with Rapha starring Australian Pro Lachlan Morton from EF Education First alongside Transcontinental winner and ultra endurance cyclist Emily Chappell. The session was hosted by Harry Dowdney from the Rapha marketing team and featured the EF Gone Racing film from this year’s Three Peaks Cyclocross Race in which Lachlan took part for the first time. There was talk about this year’s ‘Alternative Calendar’ – a programme which saw Lachlan and some of his EF teammates take on races and events beyond the traditional World Tour with the aim of bridging the divide between Pro Cycling and amateur bike riders. A programme which has proved to be highly successful and inspiring. Emily Chappell’s story is very different to that of a World Tour pro – from humble beginnings as a London bike courier to becoming the fastest female finisher at the Transcontinental Race, she spoke with great humour and insight about the extremes and challenges of ultra endurance cycling.

Saturday afternoon at the Mountain Festival saw the world premiere of Going In, presented by Trek. A feature film about the highs and lows of training and racing as a Trek Factory Racing athlete.  The Trek Factory riders then hot-footed it to our Lake District super store for a group ride in the Kentmere valley with a host of friends and great post ride beers in Hawkshead Brewery at the KMF ‘After Show Ride’.

Photography from Dan Monaghan of Cadence Images and James Vincent.