Cannondale have entered the realm of Aero bikes with what they say is the fastest road bike in the world. The all-new SystemSix is a culmination of years of research, testing and real-world input that Cannondale say is the fastest UCI-legal road bike on the market today. The SystemSix is a complete bicycle system – not just a frame and fork – designed without sacrificing any of that classic race bike feel.

EF Education Drapac rider Alex Howes described the SystemSix as the fastest bike he’s ever ridden – “In races I feel like I’m cheating. It’s an absolute weapon. The stiffness while sprinting is next level yet it handles just as well as the SuperSix Evo. Cannondale nailed it.” The SystemSix isn’t just the fastest bike based on feel, Cannondale say they have the data that proves it.  For example, a rider cruising along a flat road at 30 km/h would save 17 Watts in aerodynamic resistance when riding a SystemSix compared to a modern road bike with low profile wheels. And this saving only ramps up as the rider goes faster – at 32km/h the saving is 20W and at 35km/h it’s 26W.

Aero bikes are often seen as being the reserve of elite riders like Peter Sagan and Mark Cavendish, but Cannondale has sought to break that pattern and bring aero to the masses. The SystemSix is designed to minimise the aerodynamic drag on all elements of the bike and from their research, Cannondale have determined that at just 15km/h on a flat road, 50% of a rider’s effort is going towards resisting drag, meaning just about anyone can benefit from aerodynamics.

The SystemSix comes equipped with disc brakes only, there is no rim option on this bike. Cannondale have made this decision in order to optimise the frame around the more powerful braking option and means there’s room for wider tyres. One of the most striking features of the SystemSix are the new Cannondale KNOT 64 Hollowgram wheels which, as the name suggests, are 64mm deep and weigh in at 1,600 grams. The KNOT wheels feature an extremely wide rim (30mm external and 21mm internal) and are based around a HED patent which defines the relationship between the rim and tyre. The bike has room for up to 30c tyres but is optimised for aerodynamics when fitted with 23c wide tyres.

Coming in a range of builds starting with an Ultegra model at £3499.99 and a range topping Dura-Ace Di2, which comes equipped with a Power2Max power meter at £7999.99, the SystemSix is now available to order. 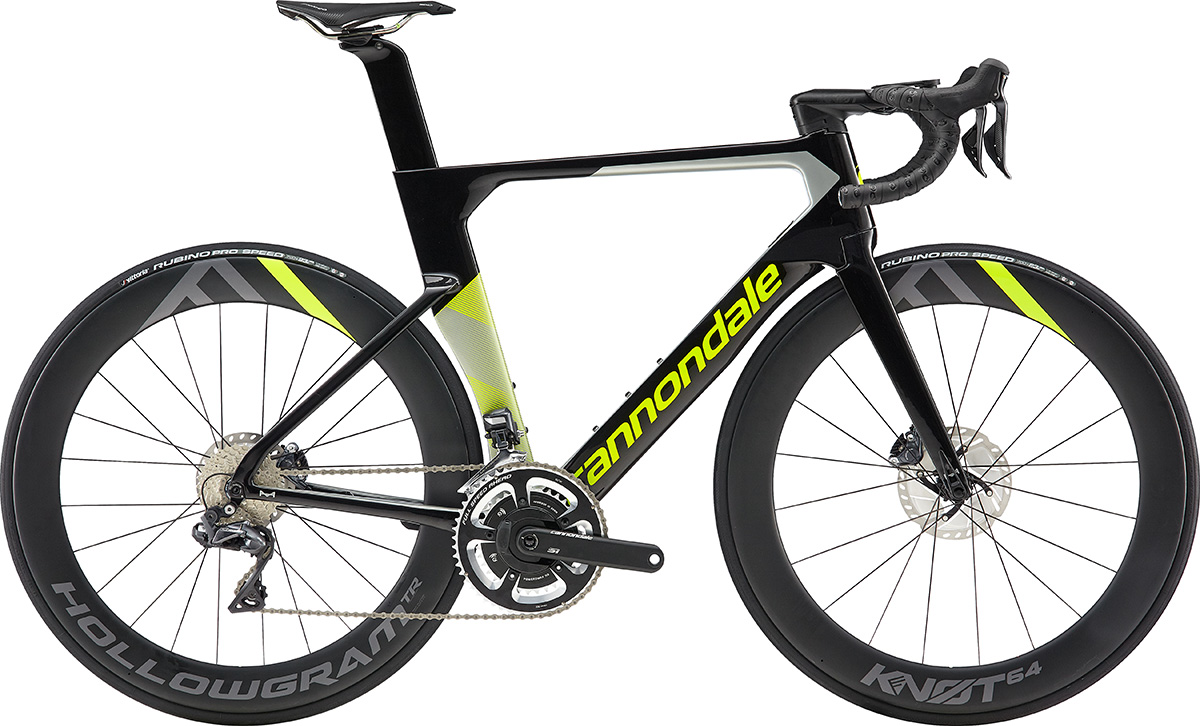