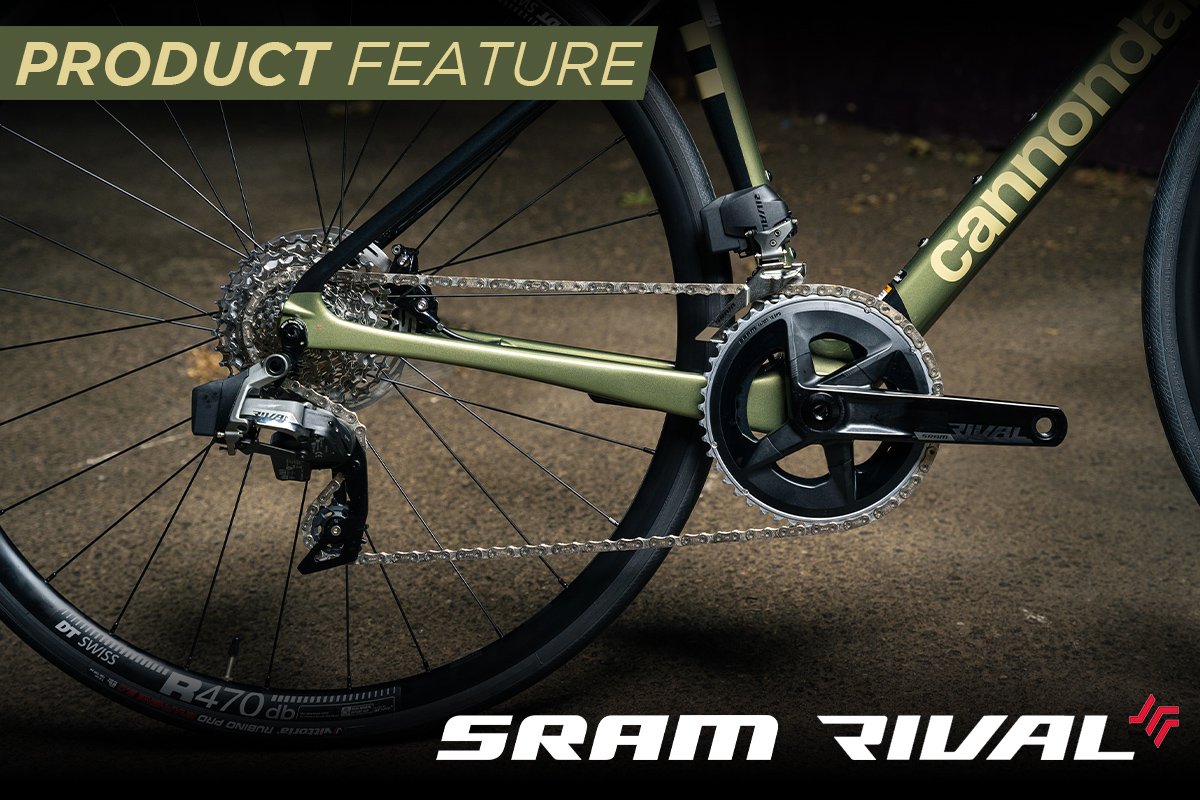 We recently got our eager mitts on SRAM’s latest road-going groupset – SRAM Rival eTap AXS; this wireless electronic groupset was launched back in April of this year, however, given the ongoing impact of Covid-19 on production and delivery times we are only now seeing this hi-tech groupset arriving to store and being adorned on some very nice road bikes. So, for those of you unfamiliar with SRAM’s groupset hierarchy the (previously mechanical, now electronic) groupset sits as their third-tier offering under SRAM Red eTap AXS which sits at the top of the tree with SRAM Force eTap AXS sitting as second tier. If you’re more familiar with Shimano componentry then think of Rival’s equivalent as Shimano 105, meaning it’s quite significant to see SRAM’s cutting-edge wireless technology finding its way down to a more affordable price point and it could be argued it’s another score on the board for SRAM in their enduring arms race with the Japanese component manufacturing giants.

In the past, when similar groupsets have launched we’d have probably gone down the route of explaining how that particular new product is full of ‘trickle down technology’ from further up the manufacturing food-chain. But to use that term when it comes to the new SRAM Rival eTap AXS groupset would be a little inaccurate because the headliner here is the this is a straight transfer of technology from SRAM Red and Force with absolutely NO functional compromises in terms of how this wireless electronic configuration operates and performs. That’s the beauty of a fully digital system; that high-quality performance can be directly replicated.

So if the Rival eTap AXS groupset performs identically to the more expensive options from SRAM what’s the rationale for some of us budgeting for SRAM Force or Red over Rival? Well, put simply it comes down to weight. While the Rival system will behave in exactly the same way, each component part has been made using more affordable raw materials and cheaper manufacturing processes with the inevitable consequence of this being an overall increase in weight. We’ll go into more detail on which of the components that make up the Rival groupset have gained weight and which have been made using alternative materials later in the feature but here’s a quick weight comparison to give you a clearer idea: 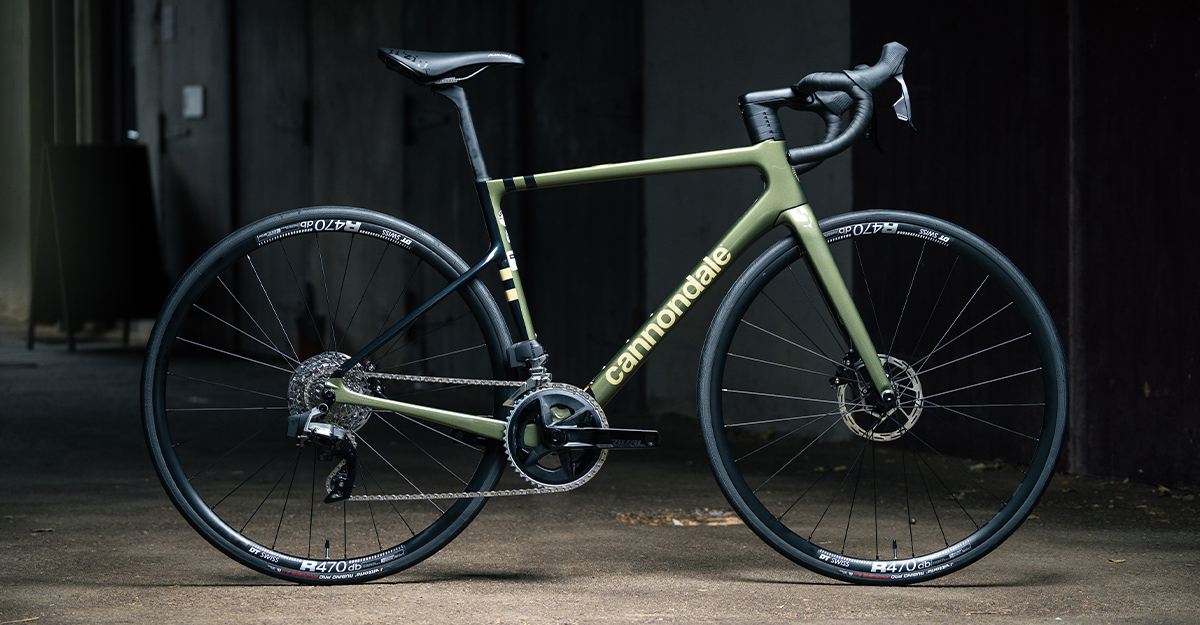 As well as SRAM Rival eTap AXS being functionally identical to its more expensive cousins it is also completely compatible, meaning if you’re purchasing your SRAM groupset componentry separately you can mix and match your level of groupset without any compatibility issues; Red, Force and Rival all work together. This also facilitates the option of gradually upgrading SRAM groupset components as you go; useful if you’re really hung up on the weight of the slightly heavier Rival components. The new Rival groupset is also tuneable with the same SRAM AXS smart phone App which provides plenty of customisable features including how your gear levers operate, a record of exactly how the gears are used right down to the detail of how much time you’ve spent in each gear and the ability to update the system’s firmware as and when you need to. 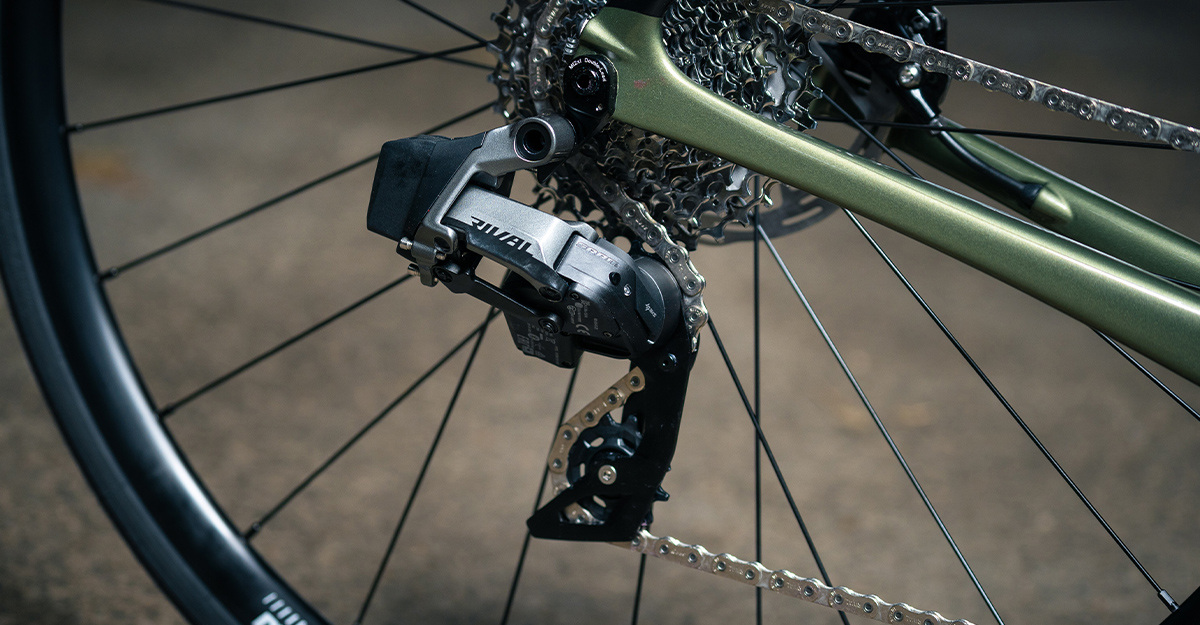 The 12-speed Rival eTap AXS rear derailleur features a spring actuated clutch rather than the fluid clutch seen on the SRAM Red and Force equivalents.

Due to changes in manufacturing processes and the use of alternative materials the rear derailleur is slightly heavier than its equivalent from the Red and Force groupsets, but to be clear, functionality is exactly the same, with each gear change being precise and consistent regardless of the terrain your riding and the conditions that you’re cycling in. While we’re on the subject of the rear derailleur it’s worth pointing out that the Rival groupset can also be run as a single chainring configuration (with no front derailleur) with the addition of that clutch mech along with the cleverly-profiled 12-speed chain meaning everything remains safe and secure even on rough terrain.

The front derailleur is equally precise in its shifting and offers almost instantaneous gear changes between the small and large chainrings, encouraging you to change gear without any consideration for whether you’re in or out of the saddle or are midway through a frenetic portion of a demanding road race. That reliability basically means you end up changing gears more often and you’ll soon find that you feel fresher over longer distances because of this.

The new Sram Rival eTap AXS gear and hydraulic brake levers look great, are ergonomic and are noticeably more compact than their more expensive SRAM Red and Force cousins; in fact you could argue that this is one component that has actually been improved on rather than being a comprised version. That said there’s a slight weight penalty to pay with the brake levers being made from aluminium rather than carbon fibre; you can also adjust the reach of the lever enabling you to match them to your hand size for enhanced comfort and control. 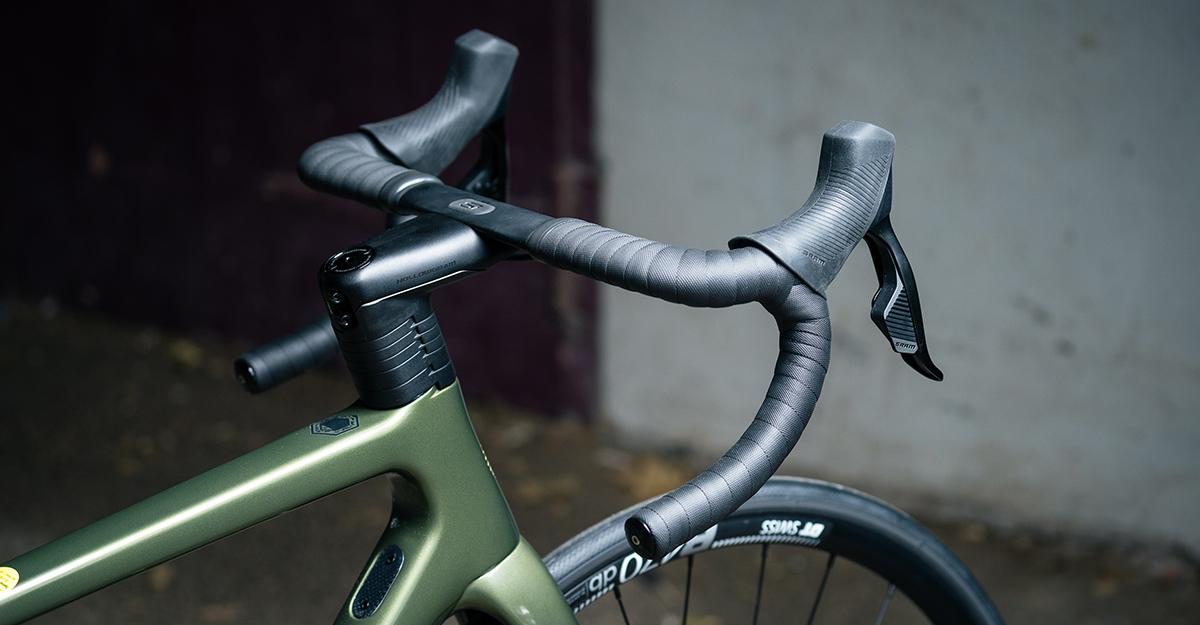 The Rival’s lever is more compact than the SRAM Red and Force equivalents and it could be argued that they’re actually better because of this.

Operation of the front and rear derailleur via the SRAM Rival eTap AXS HRD 12-Speed levers couldn’t be more simple or intuitive, simply press the right lever to shift down the block and the left lever to move up the block; an instantaneous wireless signal is sent from the shift button to the rear derailleur which activates the tiny motor to move it up or down. Press both right and left levers together and a wireless signal is sent to the front mech activating a shift, either from the big ring to the small ring or the small ring to the big ring depending on where your chain is currently sitting. If you want to change how your bike shifts you can customise the settings via the SRAM App to enable you to shift up the block with the right lever and down the block with the left lever. 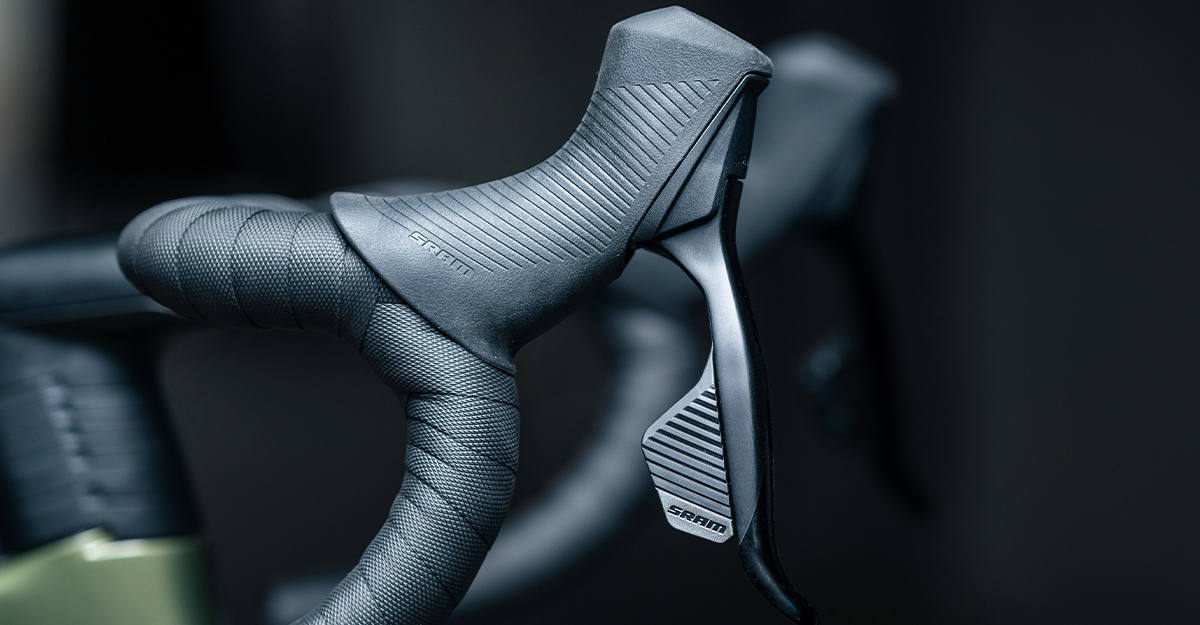 The Rival shift/brake lever feels great in your hands and features adjustable reach allowing you to customise fit.

When it comes to gear ratios and the options available, the 12-speed rear cassette is comes in two configurations – 10/30T or 10/36T, again it’s worth reiterating that the cassettes feature exactly the same spacing as the Red and Force equivalents and are also compatible with the same XDR driver body. When it comes to chainring sizes on the Rival chainset there are three options – 48/35T 46/33T and 43/30T, as we’ve mentioned previously the Rival groupset can also be setup as a single-ring 1X drivetrain with single chainring size options being 38, 40 or 42. The Rival chainset is the most notable component when it comes to weight gain over the other two SRAM groupsets as the crank arms are made of alloy not carbon with forged pieces rather than having a hollow construction like their Shimano 105 equivalents. When it comes to weight increase it’s important to not get too hung up on details; it’s really not that noticeable and with the extra weight centred in the chainset, cassette and rear derailleur that small weight increase is centred low down on the bike and does not affect ride quality. 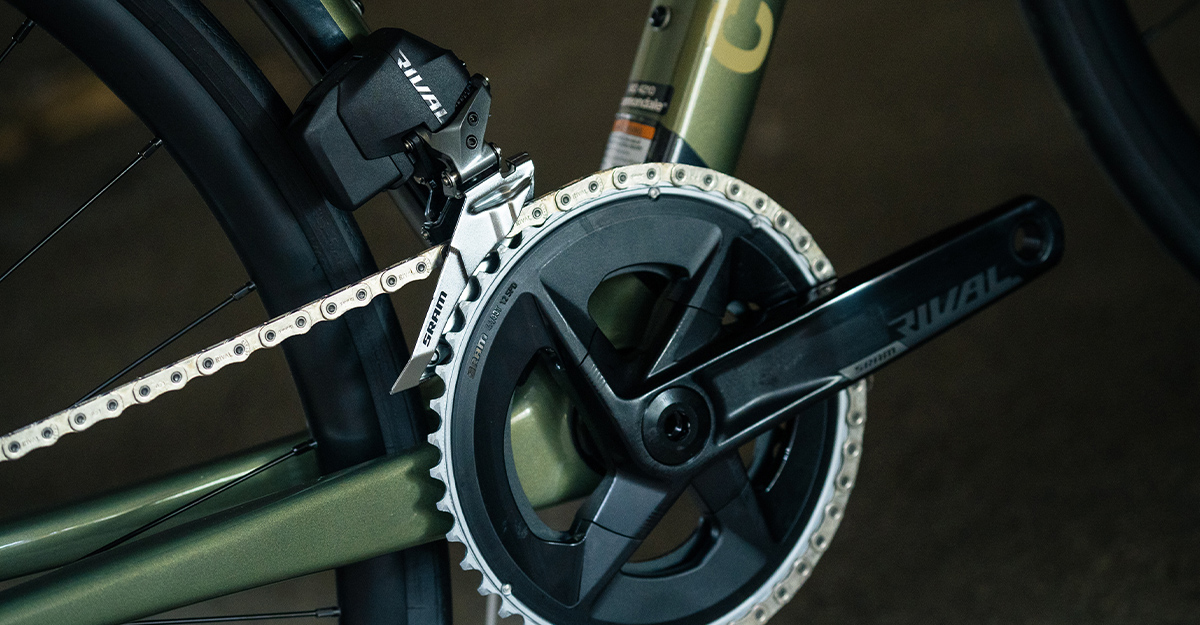 The Rival chainset is functionally identical to Red and Force while being slightly heavier due to the materials used in its construction.

It’s unusual to move from one level of groupset to another and not feel a significant difference in braking power and modulation, but here’s an instance where the opposite is the case. The SRAM Rival hydraulic brake calipers combined with those ergonomic hydraulic brake levers provide powerful, easy-to-modulate braking that stays consistent in all weathers and on all road conditions; in operation they feel exactly the same as their more expensive equivalents further up the SRAM groupset food-chain. The neat flat-mount calipers feature a slightly different configuration when it comes to how you bleed them but this is so infrequent that it’s a negligible difference. Again there’s a slight difference in weight; not so much regarding the calipers themselves, but more so the disc brake rotors which are 160mm SRAM Pacelines. 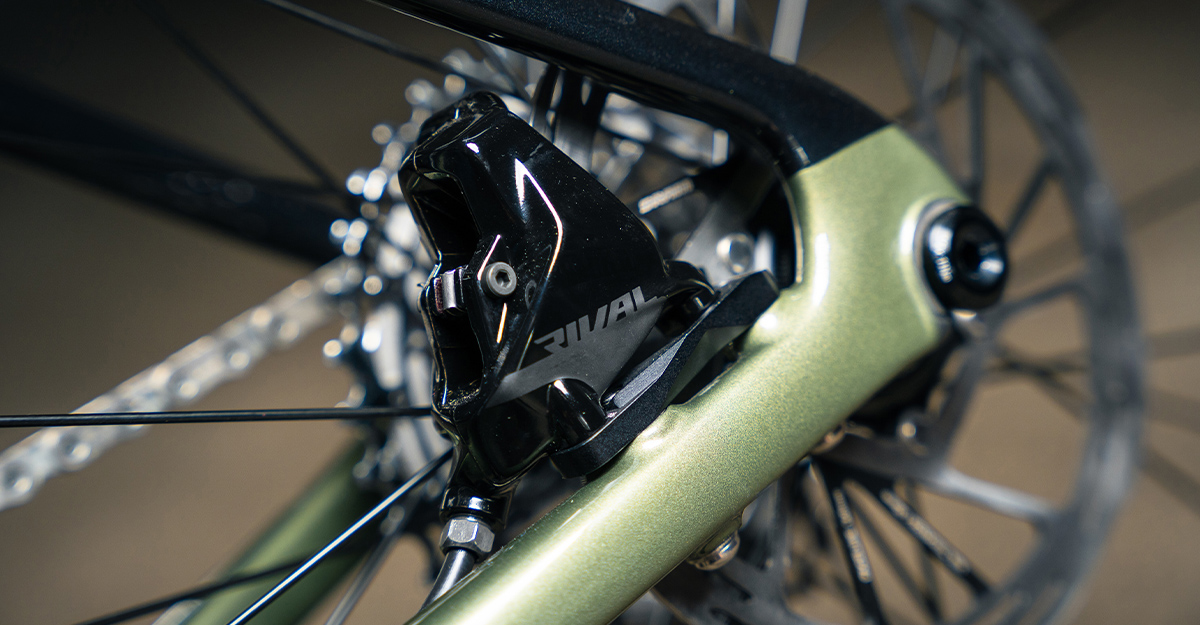 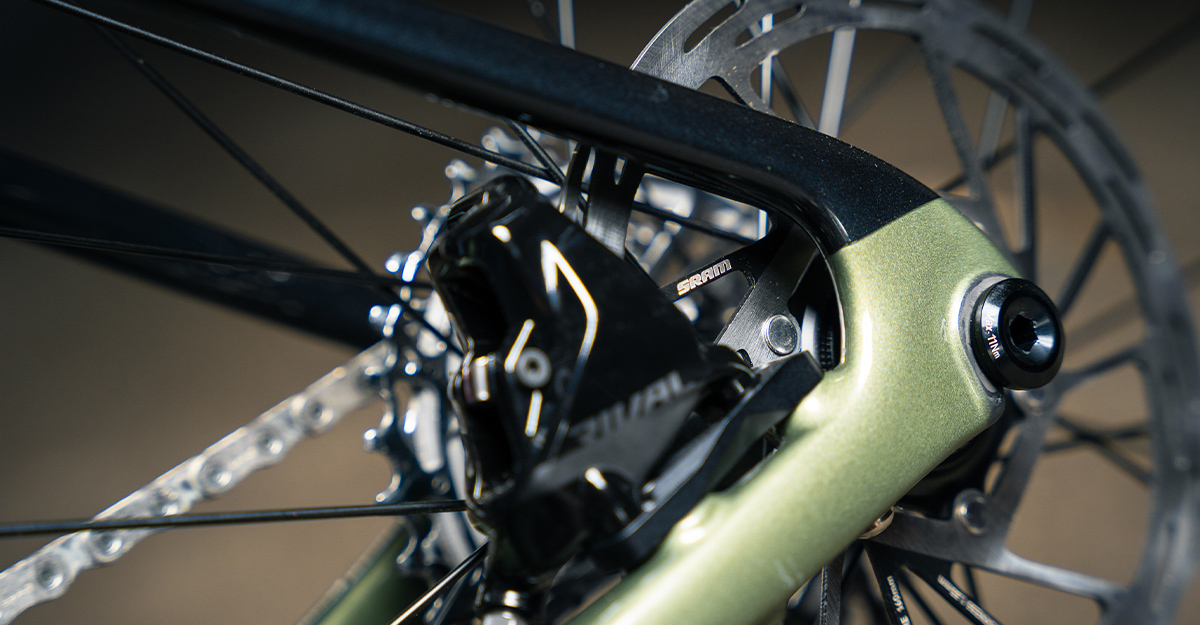 The 160mm SRAM Paceline rotors work brilliantly with the Rival calipers, keeping you in control in all riding scenarios. 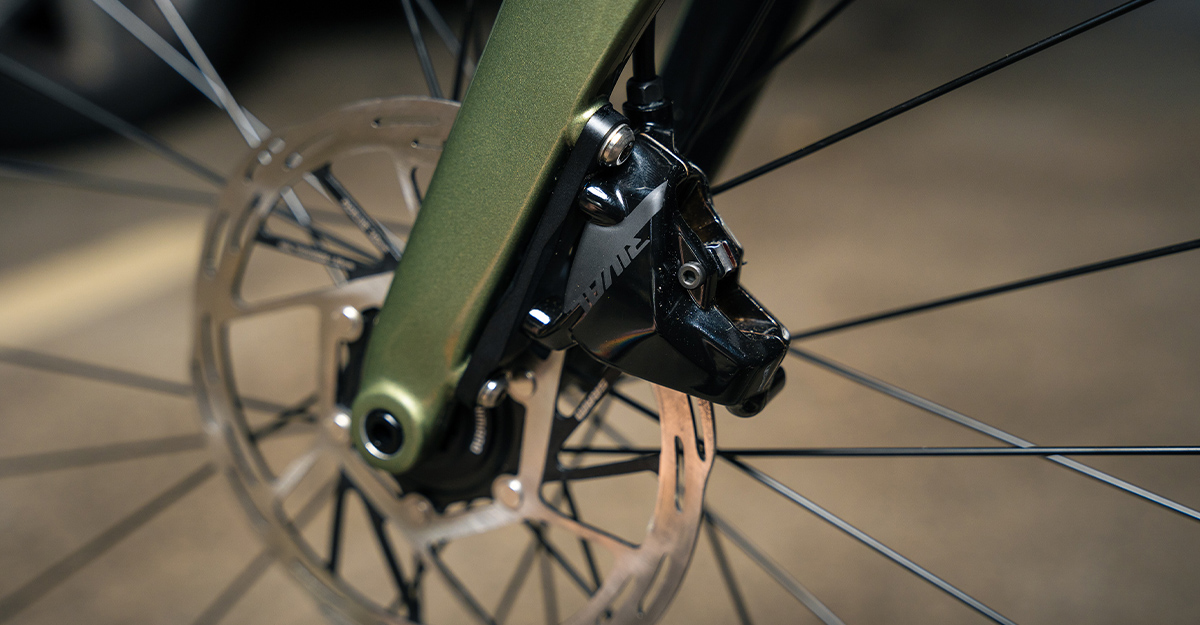 Overall weight of the Rival hydraulic brake calipers are similar to the Force versions, although the Paceline rotors are a little heavier. 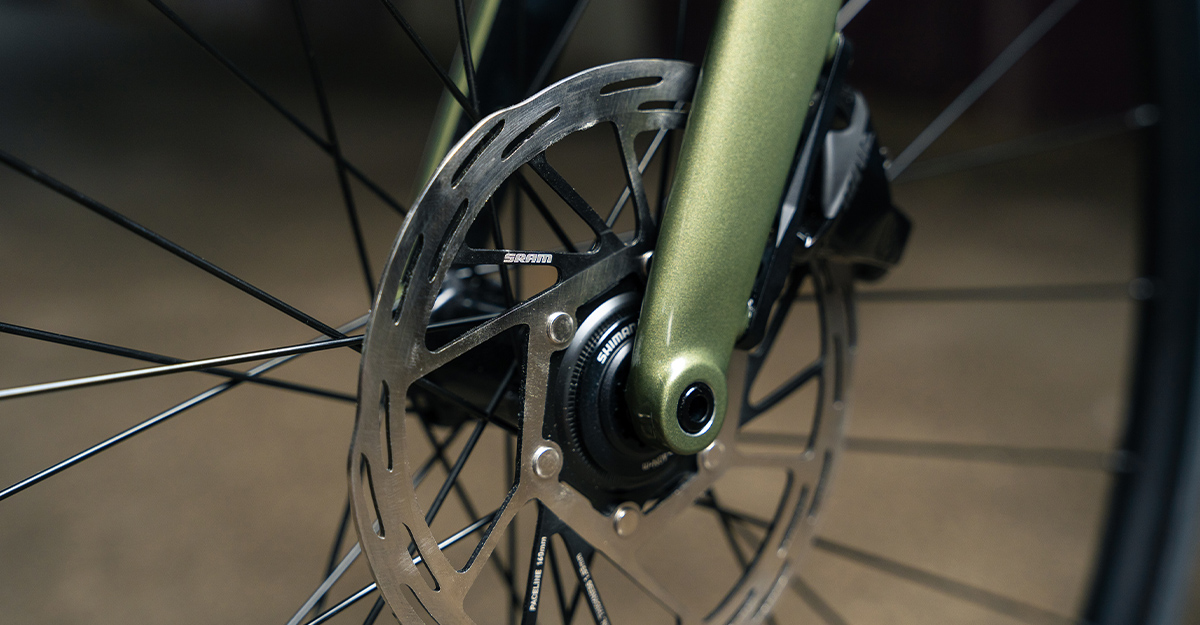 Hydraulic disc brakes on road bikes have seen rapid development when it comes to functionality and aesthetic quality.

So that’s everything you need to know about the new SRAM Rival eTap AXS 12-speed groupset. In summary SRAM have been able to put together a much more affordable groupset that will either make it more obtainable to those buying separate components (remember that versatile interchangeability between their other electronic groupsets) or, perhaps more significantly we’ll see it feature more and more on complete road bikes, allowing all of the major bike brands to spec a wireless electronic groupset onto road bikes that sit at a more realistic, more accessible price point which, frankly is great news! 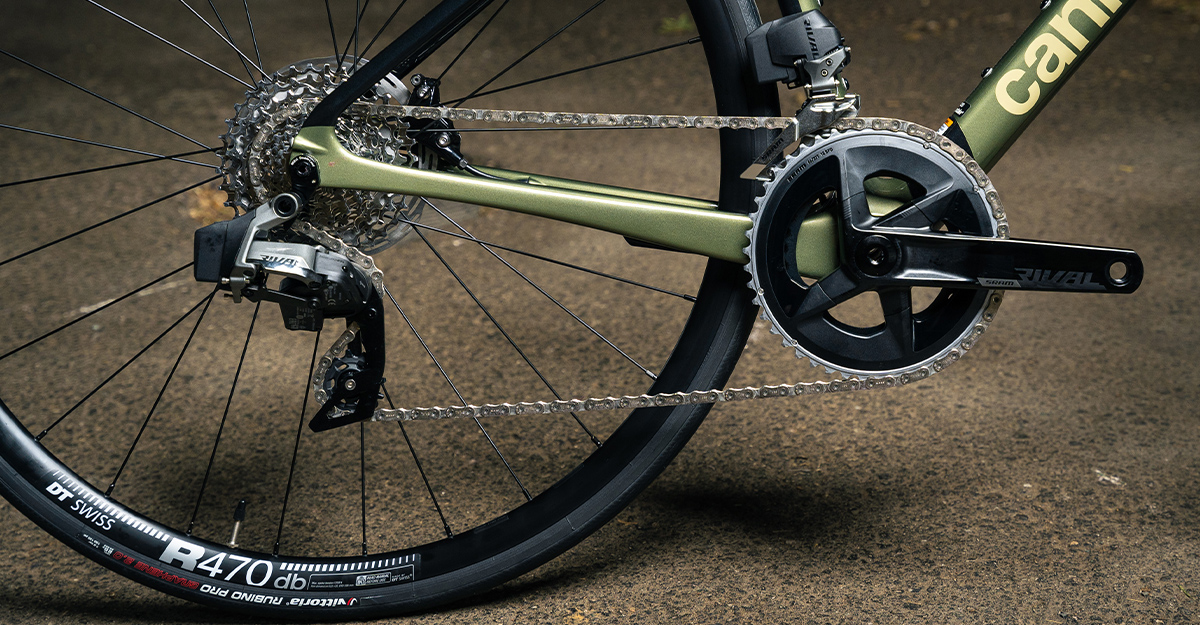 The SRAM Rival eTAp AXS 12-Speed wireless groupset will be spec’d on a lot of road bikes from all the major brands thanks to its affordability and flawless operation. 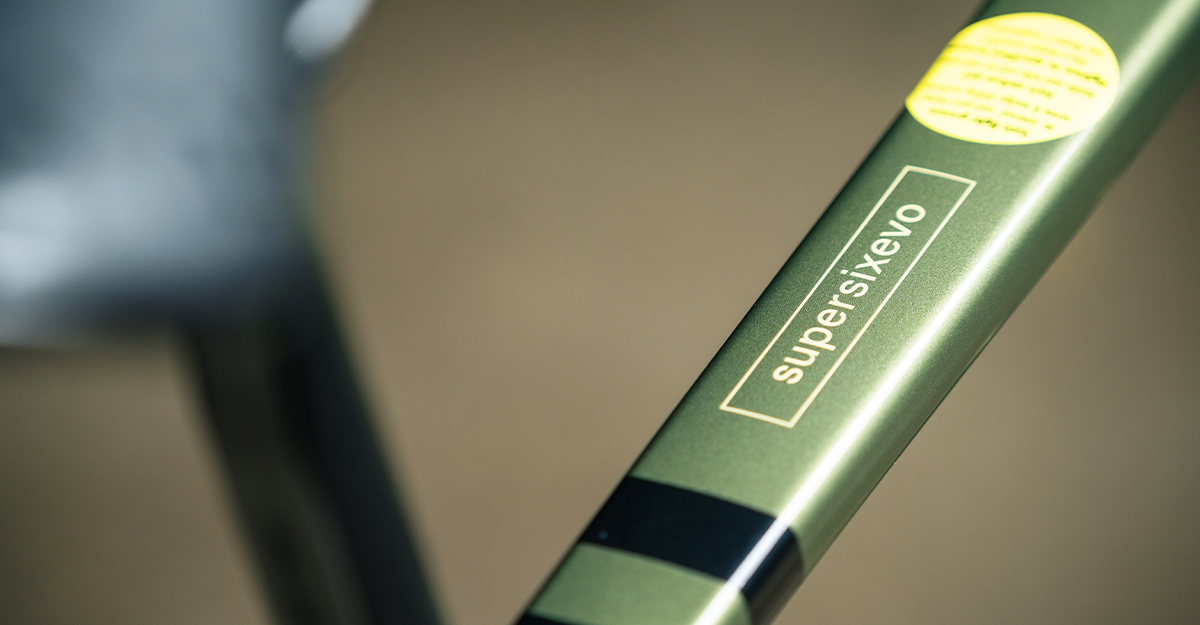 The SuperSix EVO road bike boast a rich racing heritage which has informed every element of its design. 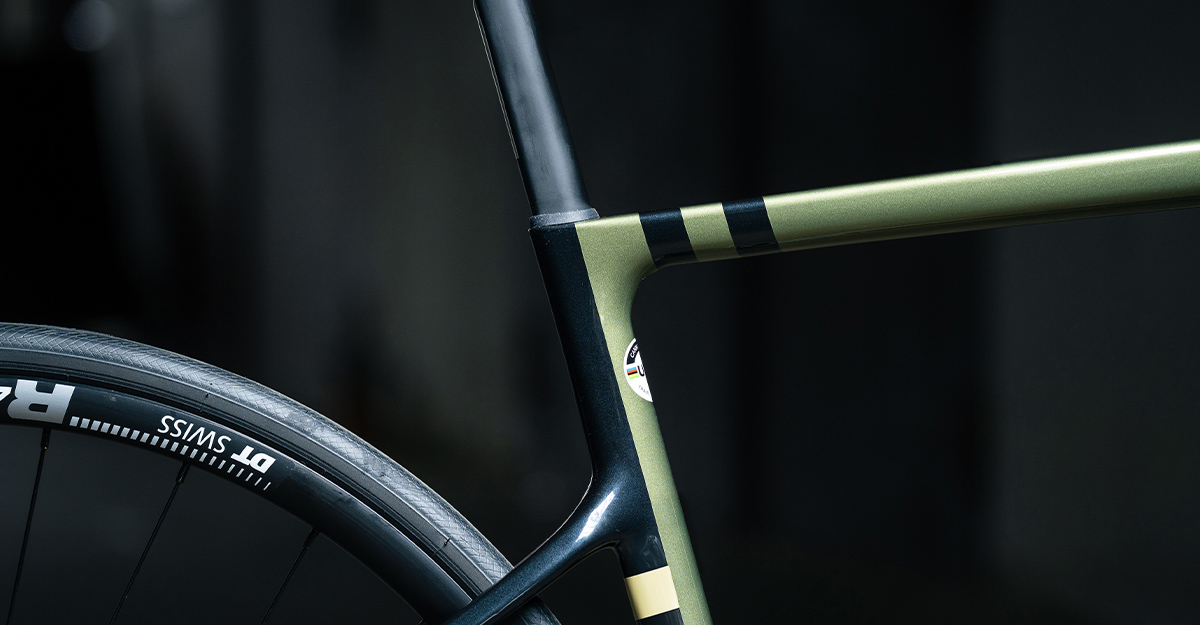 Those dropped seatstays add a noticeable amount of compliance and comfort to the SuperSix EVO. 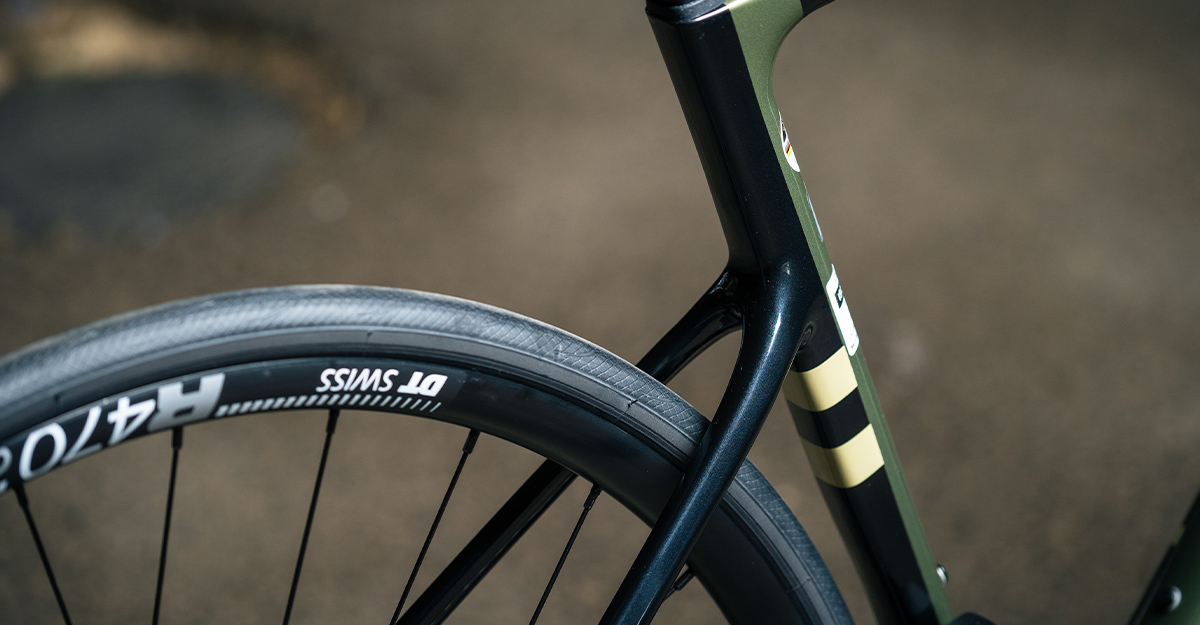 There’s plenty of clearance between the frame and tyre allowing you to run up to 32mm wide road tyres. 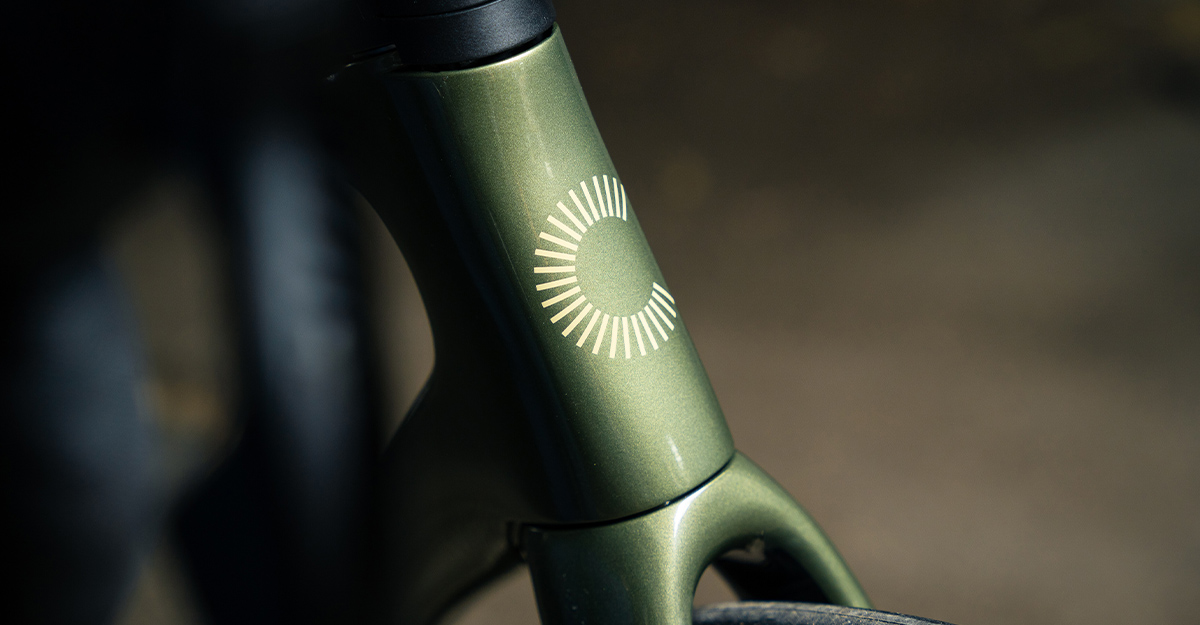 It’s a small detail, but Cannondale have recently updated their head badge design. 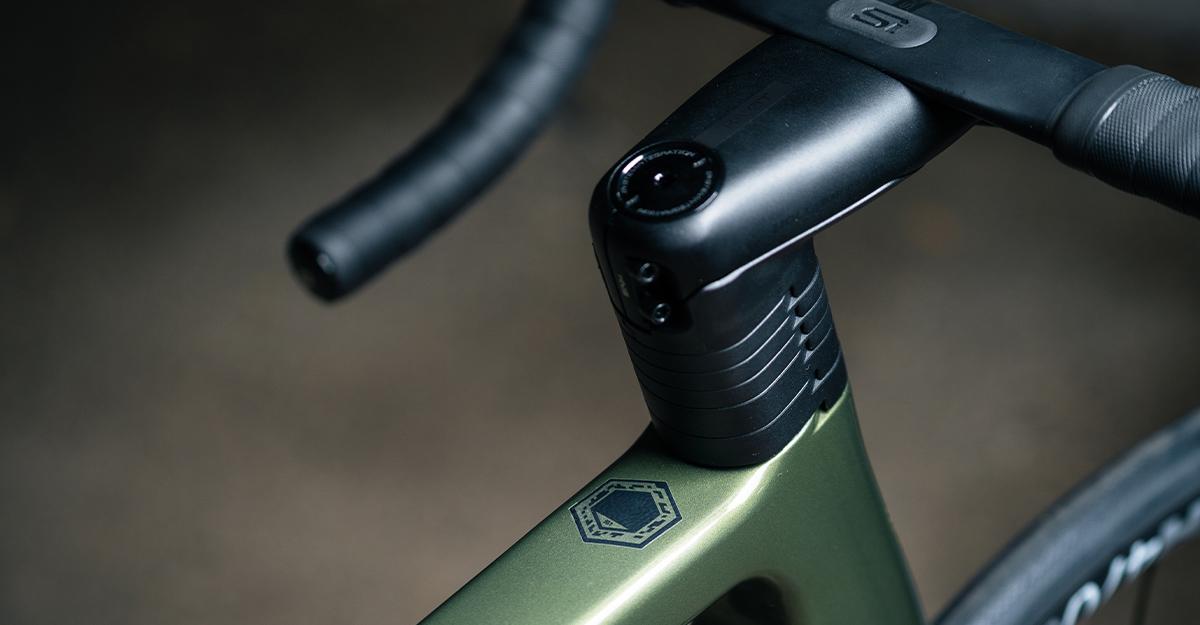 The fully integrated components stow the bikes hydraulic cables through the stem and down in the frame and fork. 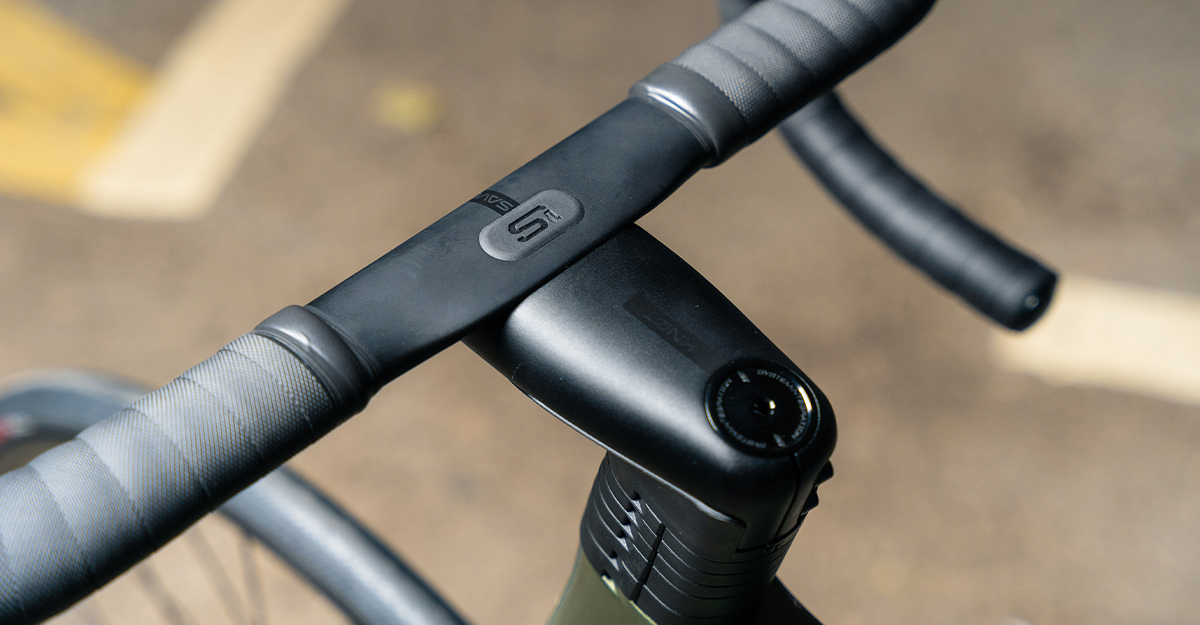 A HollowGram KNOT stem and aerodynamic HollowGram SAVE System handle bars blend seamlessly into the headset and frame. 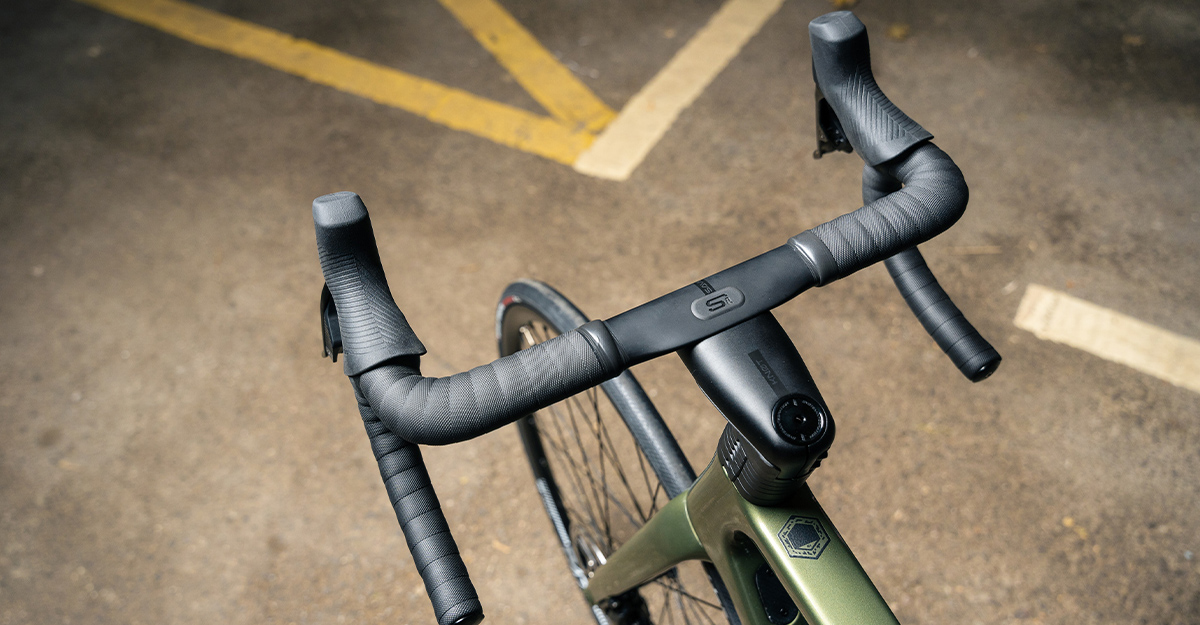 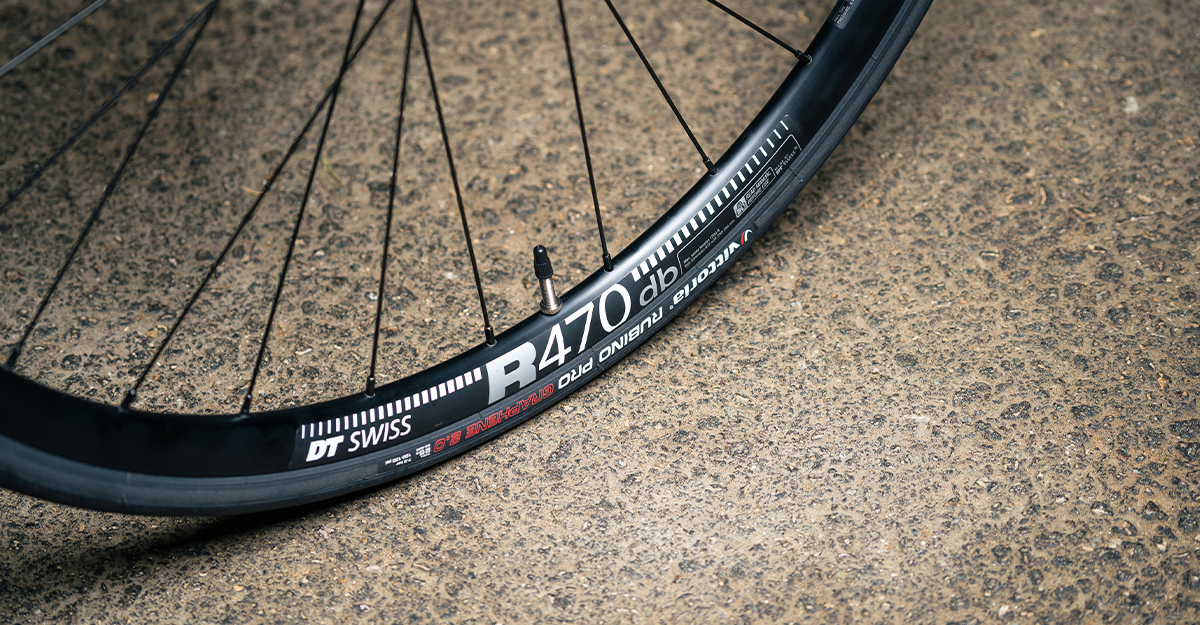 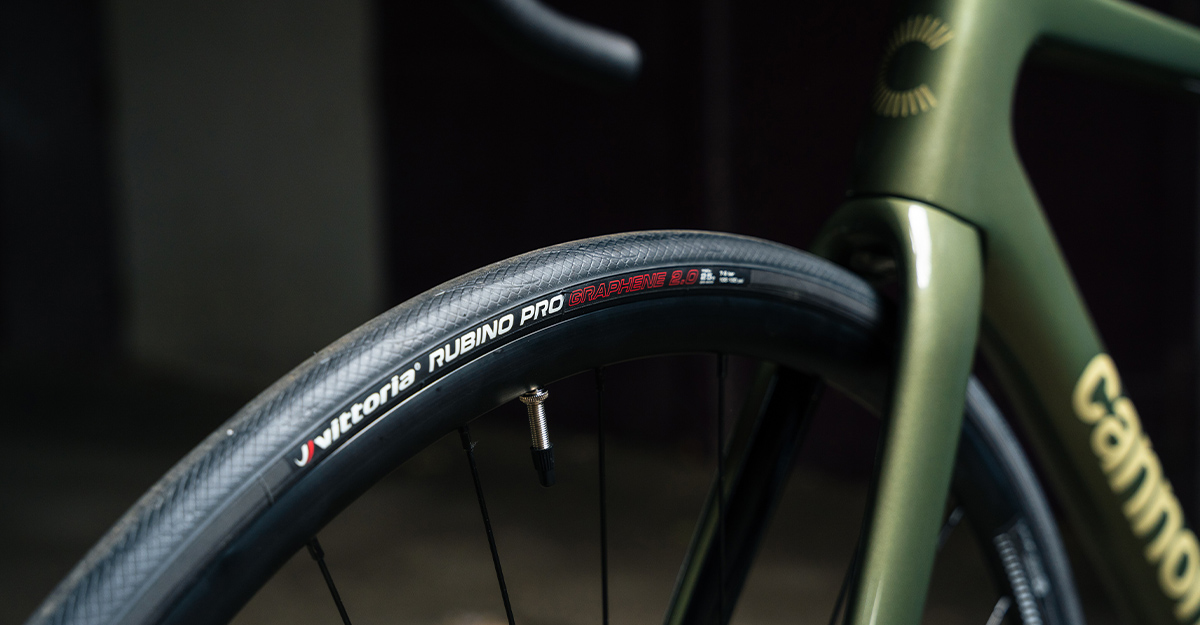 These Vittoria Rubino Graphene 2.0 tyres offer a surprising amount of grip but remain fast enough to race on. 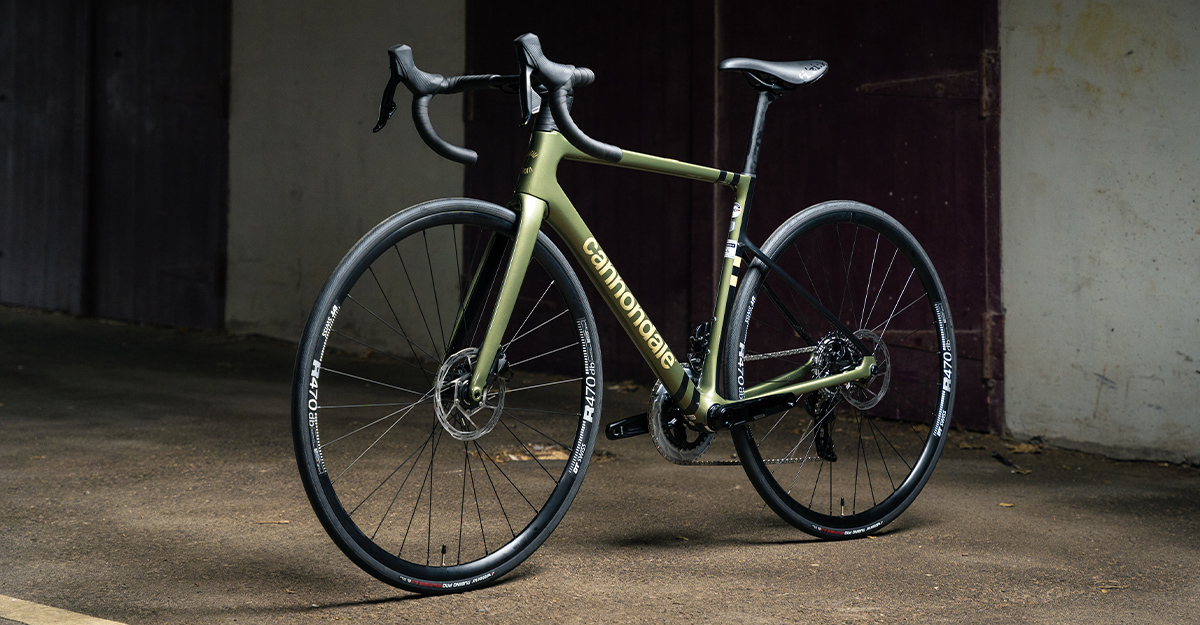 We love the styling of the SuperSix EVO Disc Rival AXS which looks classic and understated despite it’s hi-tech specification. 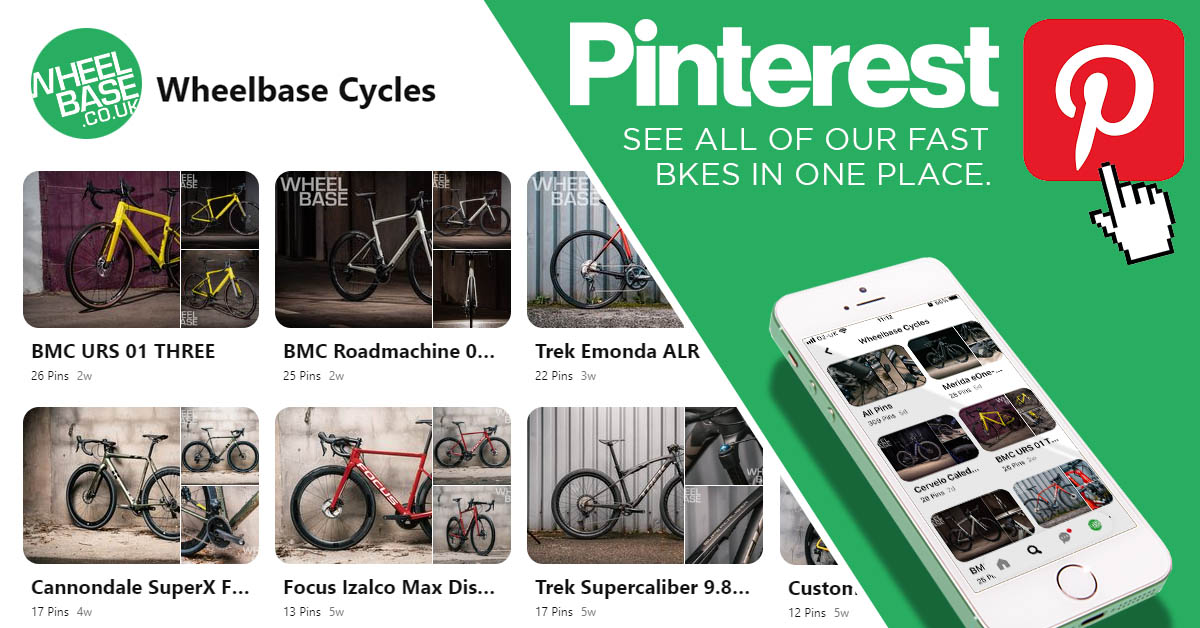