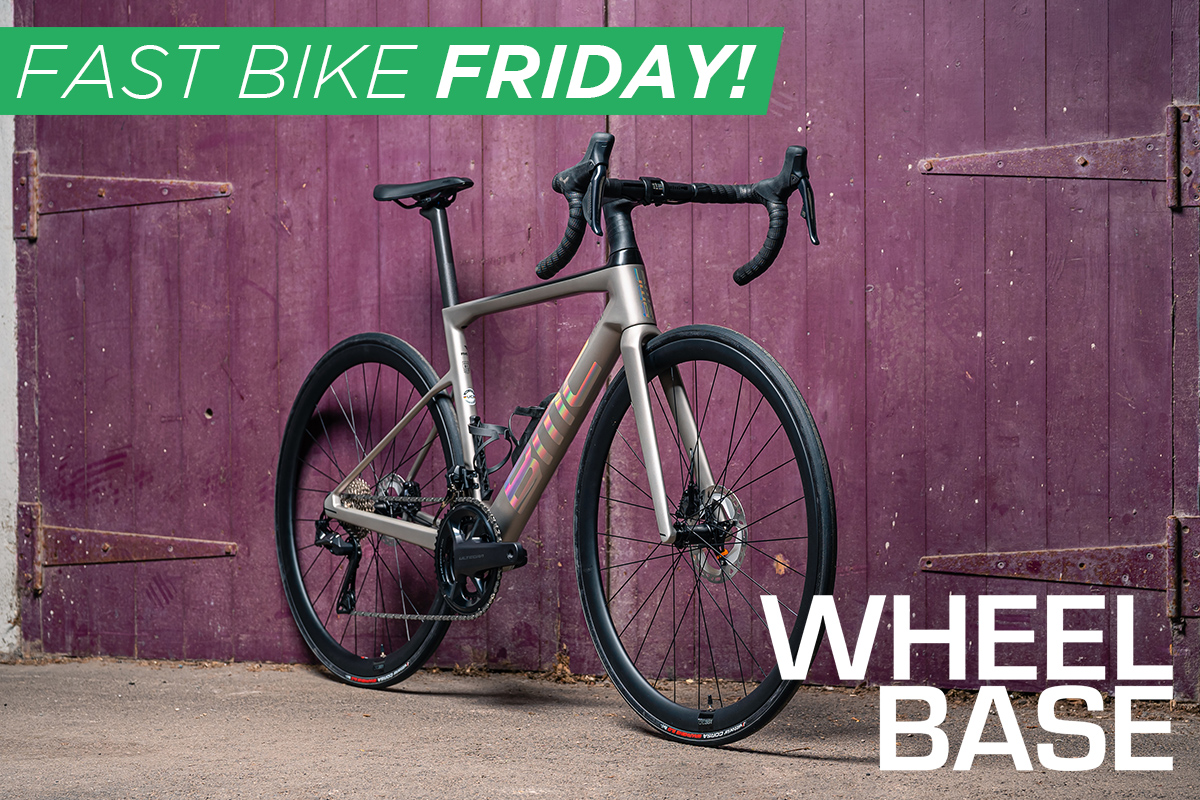 This newest iteration of the BMC Teammachine SLR01 has evolved following years of product development and refinement, all influenced by the constant performance demands of pro-cycling which BMC have part of for successive race seasons. The Teammachine SLR, has won every major title that a bike can win including Monuments, World Championships, Olympic Games and the Tour de France with Australian pro cyclist Cadel Evans; most recently the Teammachine SLR01 has been piloted to numerous race wins by the French Ag2R Citroen pro-cycling team. The Teammachine SLR01 (right) can be seen in the most demanding pro road races, piloted by the AG2R Citroen team.

BMC describe the Teammachine sub-range of bikes as the ultimate lightweight race bikes in their collection which do everything very well, excelling on the climbs. Alternatively their Timemachine Road bike is their out-and-out aero road bike which is ideal for fast flat road races where aerodynamic gains can make all the difference. The third option when it comes to BMC road bikes is their Roadmachine branded as their ‘One Bike Collection’ built for all-day adventures and featuring a frame that promises more compliance, putting the rider in a comfortable, neutral riding position.

So who is the Teammachine for? Well, if you’re looking for a modern disc-brake-equipped high-performance road bike which is super-lightweight and flies up the hills while remaining aerodynamically efficient then the BMC Teammachine is the perfect option for you. Want to understand more about the Timemachine Road and the Roadmachine road bike options? Check out our full breakdown of the BMC road bike range HERE. 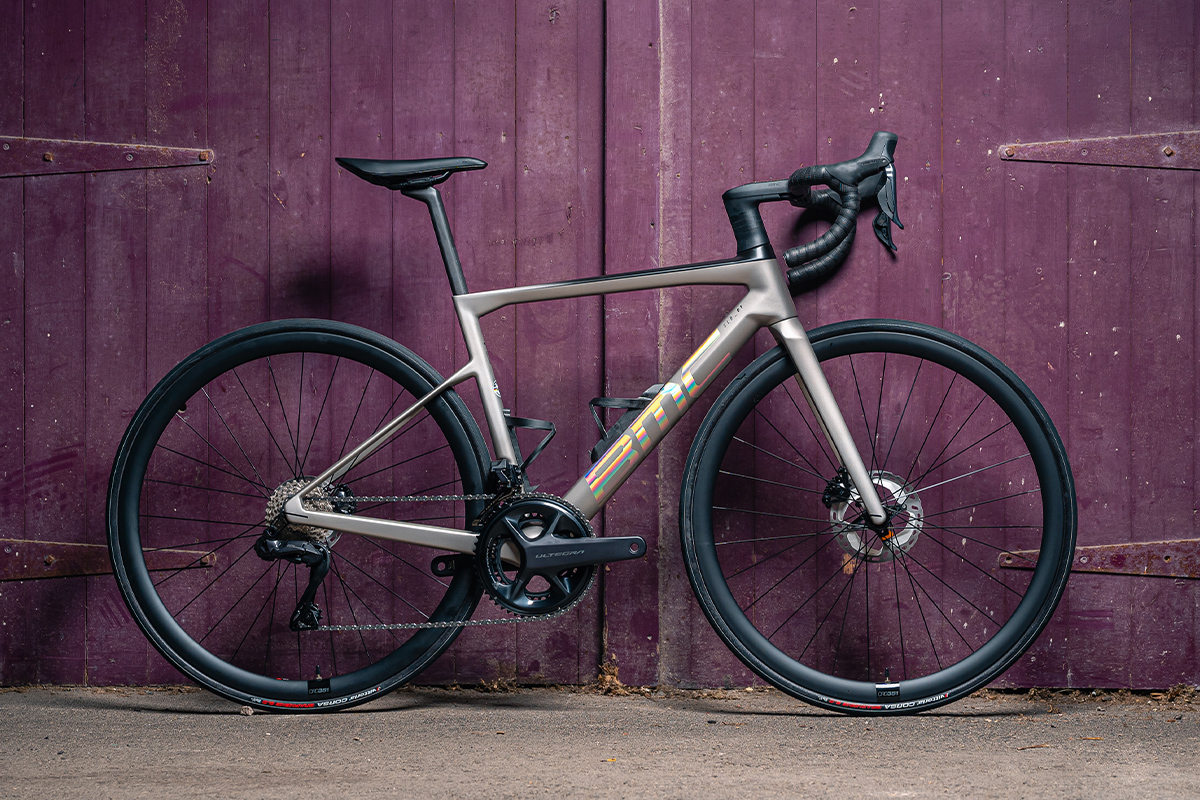 The Teammachine’s angular tube profiles are unique to BMC making their road bikes instantly recognisable within the bunch.

The Swiss designers and engineers take their job seriously, there’s no flamboyant, unnecessary additions to the design process here, the BMC Teammachine is a brilliant example of the ‘form follows function’ principle. If you’re unfamiliar with the term, the principle is this – ‘an object’s shape should primarily relate to its intended function or purpose’. We think the BMC road bikes have nailed this. While those angular and truncated frame tube profiles look great, they also serve a really important purpose too, making the Teammachine more aerodynamically efficient. It seems that BMC have arrived at the same conclusion as almost all other road bike brands and have included dropped seatstays that, with some clever engineering and sensitive carbon layup are not only more aerodynamically efficient but provide the rider with enhanced levels of comfort in the saddle too. 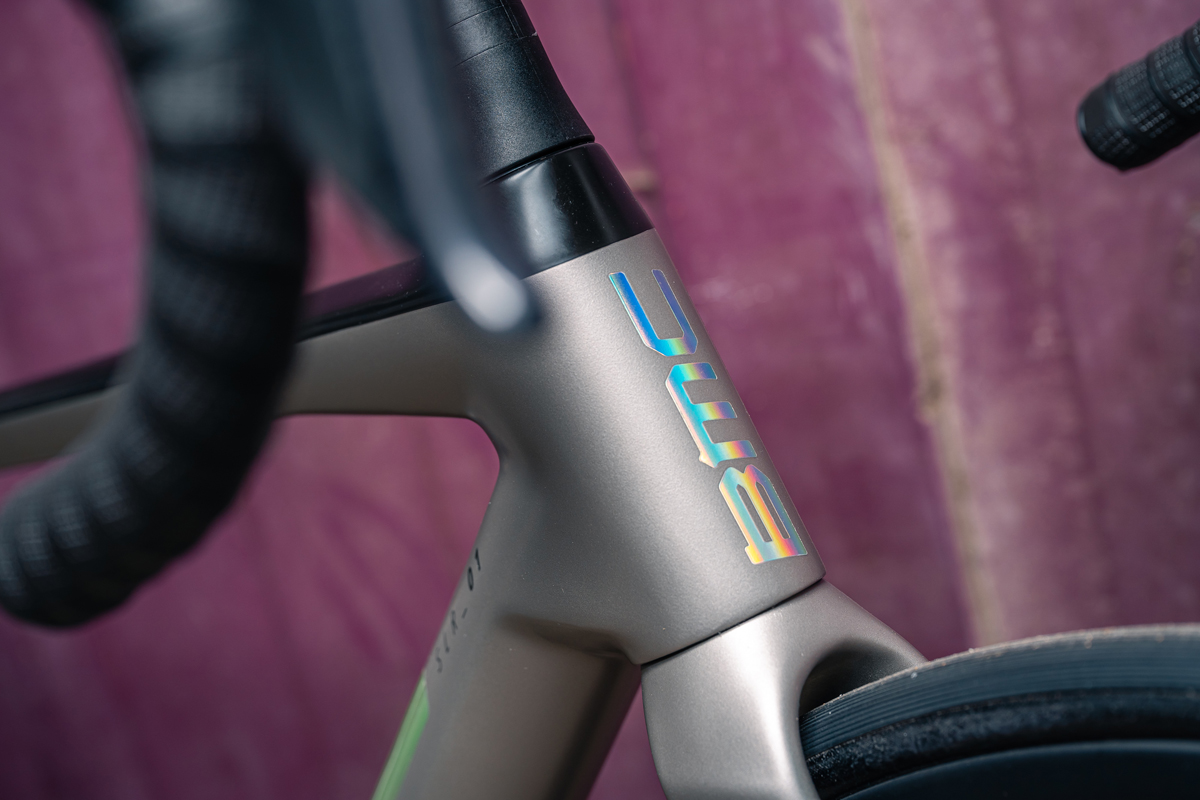 The Teammachine SLR01 features a fully-integrated front end for superior aero-efficiency and a clean, uncluttered look. 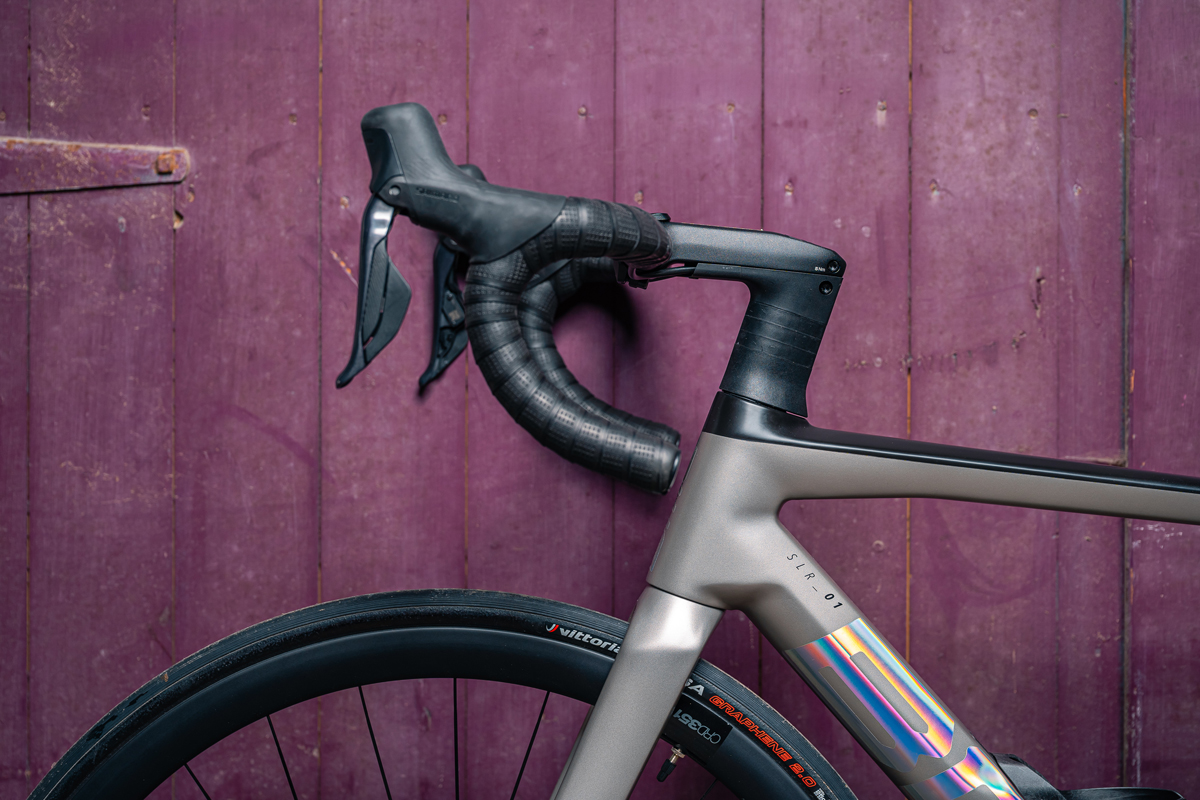 With all of the cables routed through an integrated BMC stem and into the frame and fork the SLR01 boast some impressive aerodynamic stats. 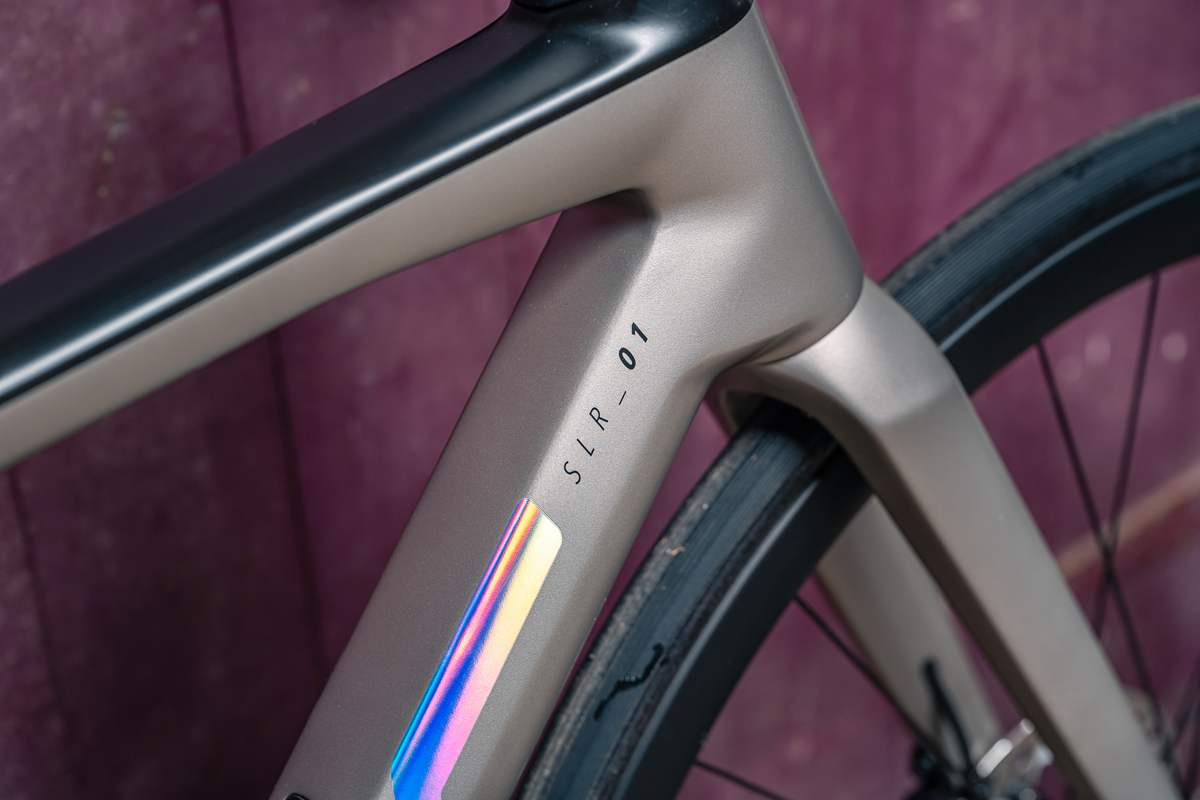 Developed through Computational Fluid Dynamics (FLD) and wind-tunnel testing each angle has been sculpted to cut cut through the air with less drag. 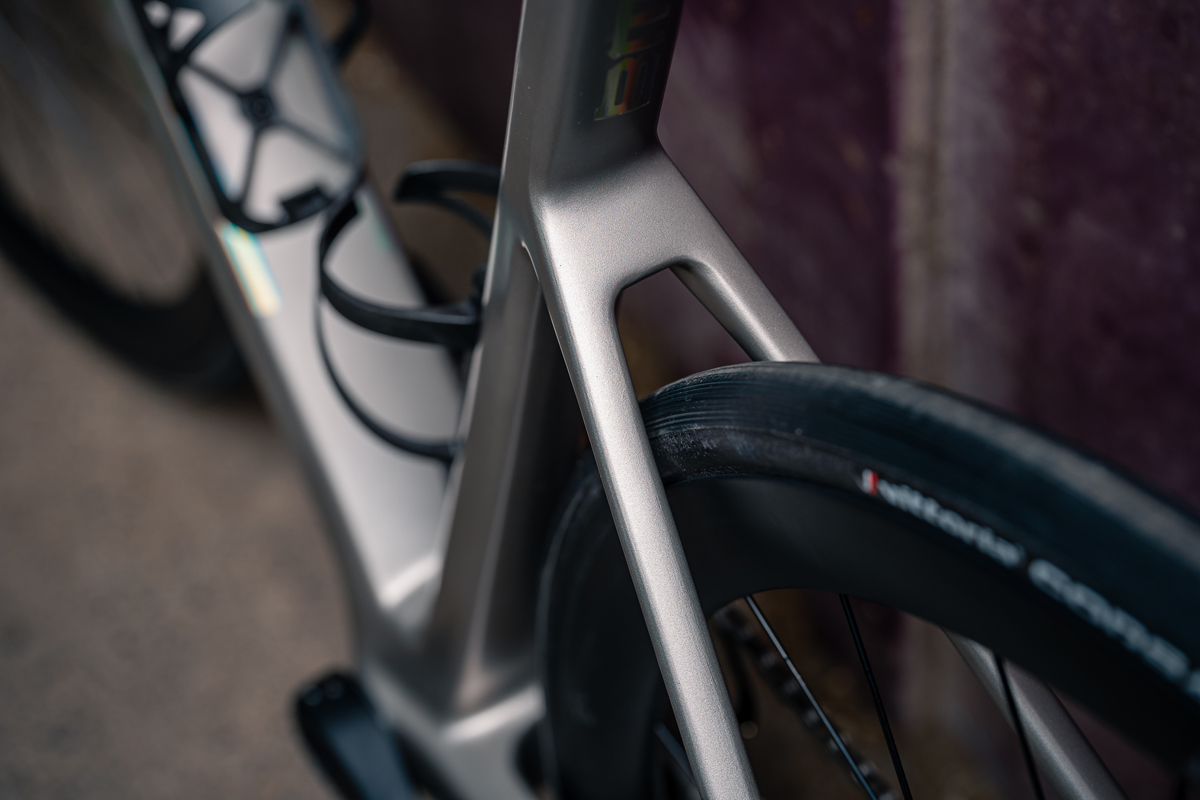 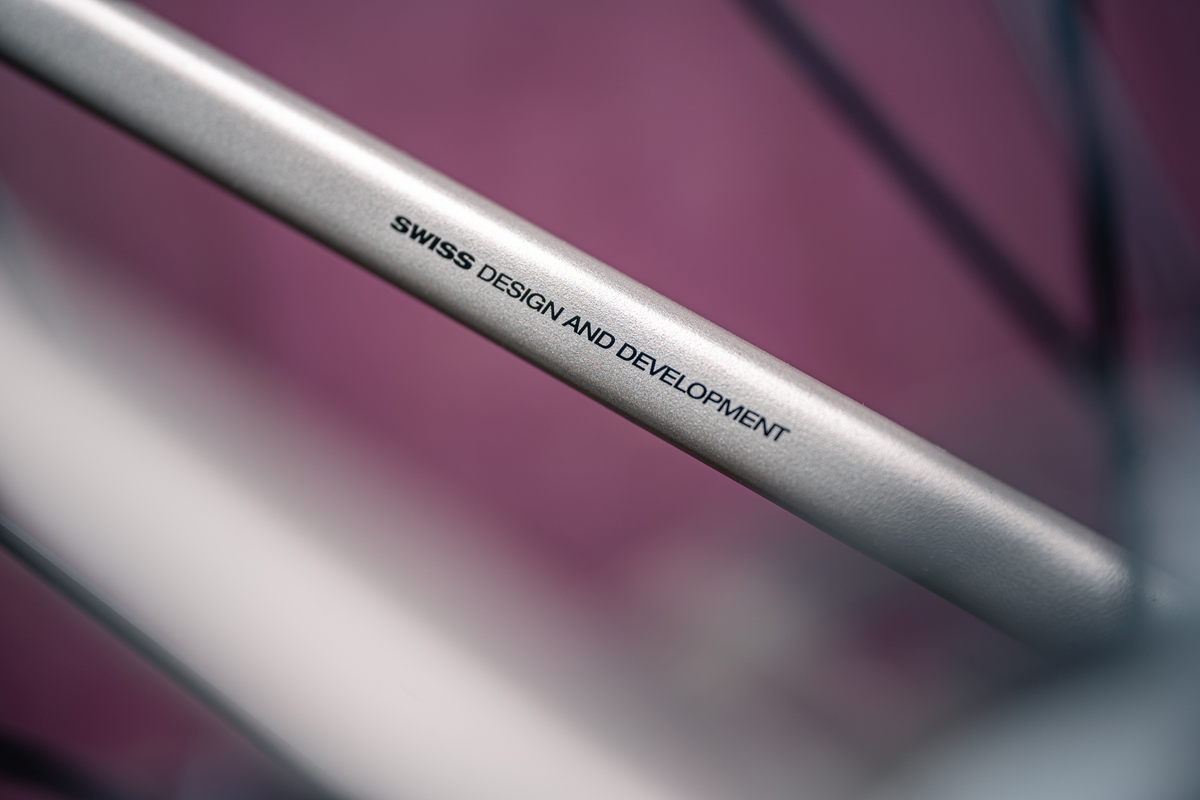 UCI approved for competition; you’ll see the French pro team AG2R Citroen piloting the Teammachine in the mountains of the Tour De France.

As the Teammachine SLR01 Five Ultegra Di2’s model name suggests, this BMC features Shimano all-new 12-speed electronic Ultegra Di2 groupset. This new cutting-edge groupset was launched in Autumn of 2021 and it’s taken a few months for us to see it starting to appear on complete bikes. It was launched alongside its super-bling Dura Ace cousin and basically mirrors all of the brilliant functionality of that groupset only made with slightly more affordable materials and consequently carrying a small but almost negligible weight gain.

When it launched there were two significant headliners for both groupsets. Firstly the Japanese brand had made the leap to a 12-speed drivetrain, just as their nearest component-manufacturing equivalents SRAM and Campagnolo had done previously. Secondly the new electronic groupset was wireless (kind of) like their SRAM equivalents. I say kind of because the new Ultegra Di2 electronic groupset actually features a ‘semi-wireless’ system; it’s a sort of ‘best of both worlds’ approach which benefits from having wireless shifters eliminating the requirement to route the wires through the handlebar into the frame. 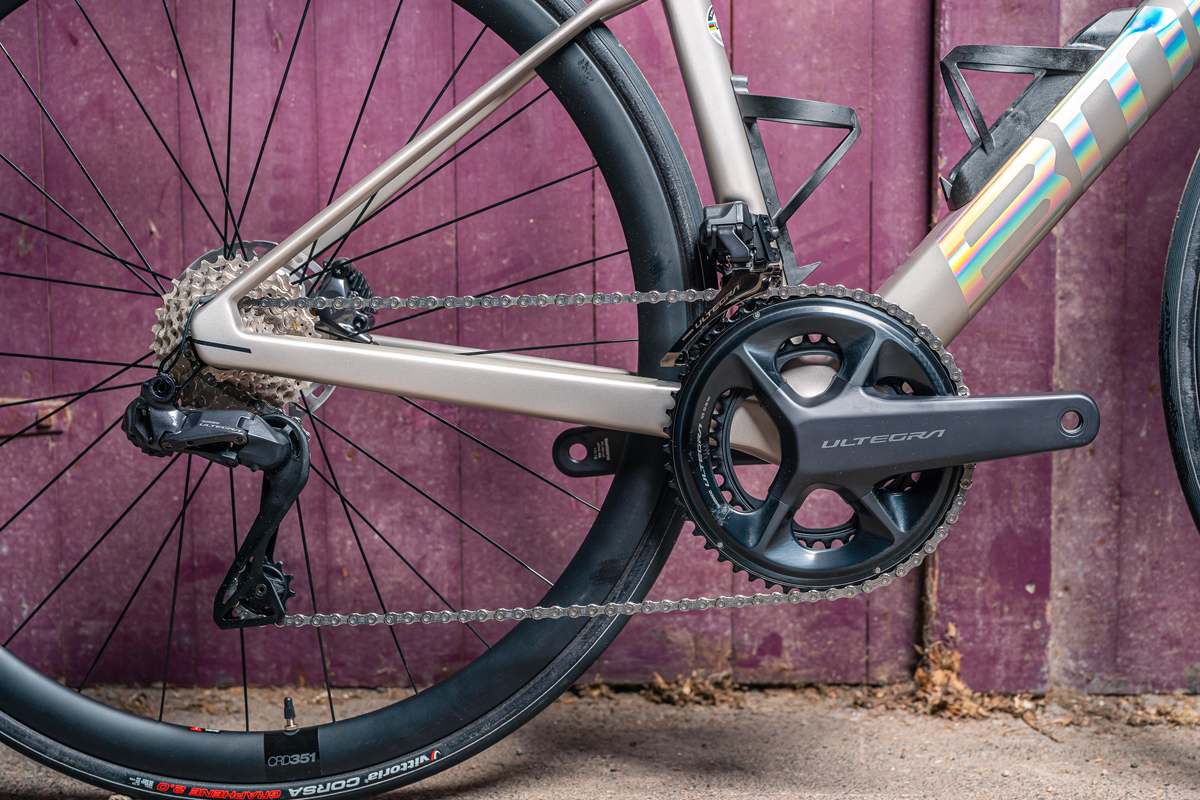 This wireless cockpit which looks so clean and simple on the Teammachine, is paired with a wired portion within the rear of the frame linking the front and rear derailleur and connected to an internal battery that powers them both; Shimano state that this solution guarantees longer run times thanks to a more efficient central source of power, compared say, to totally wireless front and rear derailleurs which require their own battery power source located on the mechs themselves (as seen on the SRAM system). The new-gen Shimano Ultegra R8100 Di2 electronic rear derailleur is even neater and more compact than its predecessor. Those who have already used the new Ultegra R8100 D2 shifters have remarked on the comfortable feel of the shifters with their taller hoods. Just like the rear derailleur, the Shimano Ultegra Di2 front derailleur has become more compact and helps to increase clearance for larger tyres.

The 12-speed Shimano Ultegra R8100 Di2 groupset spec’d on the Teammachine SLR01 Five Ultegra Di2 features the sort of gear ratios that you’d expect for a road bike which is focused on performance and racing. Upfront that all-new, hot-looking Ultegra chainset features 52-36T chainrings combined with a close-ratio 12-speed cassette out back with the spread of gears going from 11 teeth to 30 teeth. That addition of an extra cog in the rear cassette helps to make the jumps from each gear ratio smoother and more efficient, especially in a racing scenario when you’re trying to stay on top of your gear. The Shimano Ultegra R8100 chainset has been re-sculpted and boasts a clean look.

Shimano have spent some considerable time on developing the new Ultegra R8100 hydraulic brakes and they are noticeably more compact than their predecessors. This completely new design addresses some small issues that were identified on the previous versions; while there was never an issue with the amount of braking power generated they could be a little noisy and difficult to setup. The new Ultegra calipers feature a decreased weight and increased rigidity while a greater amount of pad clearance (10% more) guarantees a much quieter ride. The Teammachine SLR01 Five Ultegra Di2 comes spec’d with a pair of super-fast, lightweight carbon CRD-351 tubeless-ready disc-brake wheels. The development of modern road bikes and the universal move to disc brakes has seen a change in attitude towards how we all run our road bike tyres. Wider rim profiles and increased spacing between wheel and frame have opened up the possibility of running wider road tyres at lower pressures; while this bike comes fitted with fast-rolling but grippy 25mm Vittoria Corsa tyres there’s clearance for 28mm tyres and they’ll sit nicely on those wide CRD carbon rims. Being tubeless-ready you’ll be able to run lower tyre pressures for improved grip and enhanced comfort once set up tubeless. With its short nose, large cut-out portion and 140mm width the Fizik Argo Vento R5 saddle will suit most cyclists. Thanks to its short profile and stubby nose this saddle is comfortable even when you’re down in the drops putting the power down. BMC have blended a traditional, round-profile handlebar with their aero integrated stem giving you comfort and speed in equal measure.

The BMC Teammachine SLR01 Five Ultegra Di2 road bike has been brilliantly designed and engineered to be aerodynamically efficient, uncluttered and fully-integrated for enhanced performance at race speeds. With a stiff, responsive, lightweight frame the Teammachine SLR01 Five lets you dance uphill but not at the expense of comfort, with just the right amount of compliance engineered into the frame through clever tube profiling and carbon layup for a comfortable ride even when you’re spending hours in the saddle. The other major talking point on this particular bike is the all-new Shimano Ultegra R8100 Di2 electronic groupset; typically of Shimano the differences aren’t immediately obvious, reflecting Shimano’s measured approach to product development where function leads the way and gimmickry is not a consideration. Rest assured though this new 12-speed electronic groupset marks a real step forward in terms of flawless function and user-friendly benefits, particularly in the heat of a race. Cutting edge with classic looks, BMC have nailed it with the Teammachine SLR01 Five Ultegra Di2