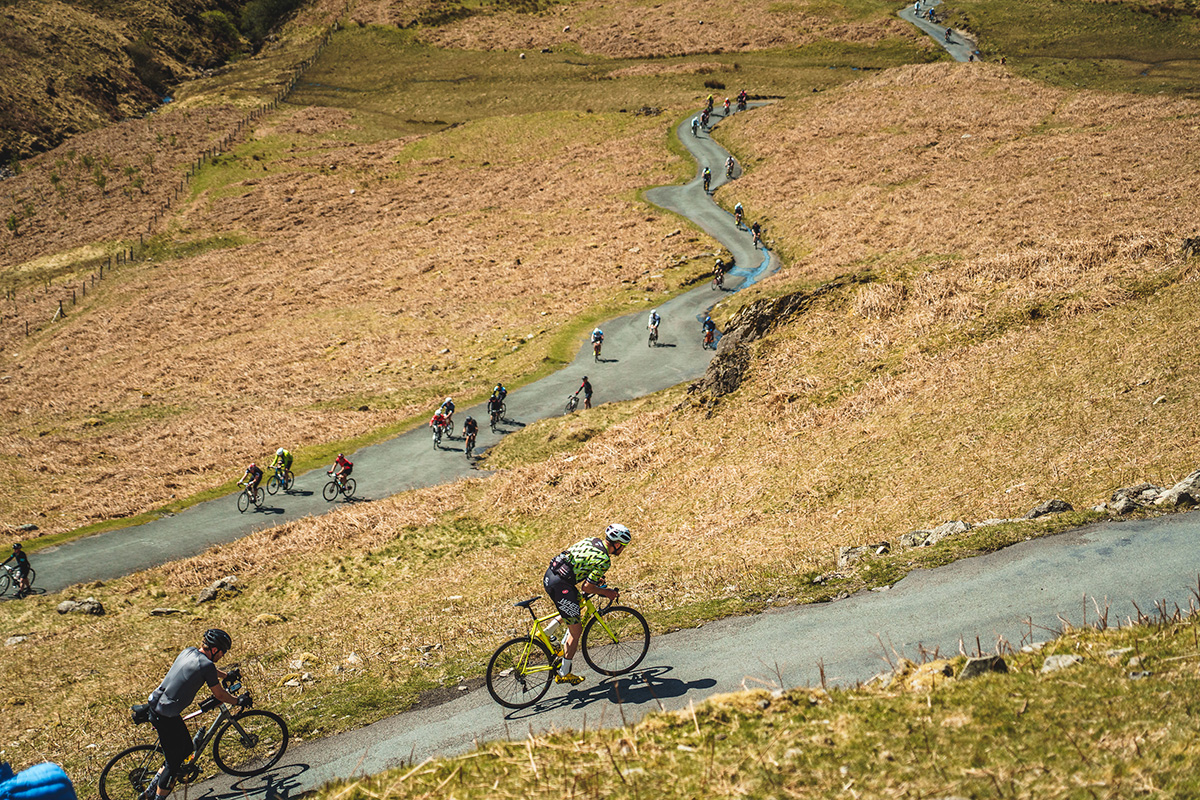 Now in its 20th year, the Fred Whitton Challenge is regarded as Britain’s toughest one day cycle sportive – 114 gruelling miles around the English Lake District including the infamous Hardknott Pass.

Yesterday some our of team members took part in the event which sets off from Grasmere and takes in six major Lakeland passes over the course of a truly challenging route within the Lake District national park. With almost 4,000m of climbing including sustained gradients of well over 25%, the Fred Whitton challenge is a bucket-list ride for all keen road cyclists. The event is run in memory of Fred Whitton, who was an integral part of the North West cycling community until his untimely death in 1998.

Sean from our web team was among the 2,500 riders who took part in the event this year, read his thoughts on the day below.

Regardless of fitness level, the Fred Whitton Challenge is a cycling sufferfest. Whether you’re looking to complete the ride among the elite riders and get round in 6 hours or less or if you’re goal is to complete the ride inside the time limit, it’s generally assumed that at some point you’re going to hurt. Never to be underestimated, with gradients regularly pitching above 25%, this is a ride that requires serious training and commitment.

This is the third time I’ve taken part in the event and on each occasion I’ve been fortunate to ride in near enough ideal conditions. After a chilly start to the ride this year, the sun came out and stuck around for the entire day. This made kit choice fairly straightforward and took some of the stress out of the day to come.

Setting off from Grasmere at 7:20am, I managed to get in with a fast group gunning for a time around the 6 and a quarter hour mark. This made for an electric pace from the start and we flew along the main road to Ambleside and to the start of the first climb of the day, Kirkstone Pass via the steep Holbeck Lane. The fast pace continued all the way up the 9km to the summit and the route’s highest point of 454m. Unfortunately I lost contact with the group near the top and was set for a long, mostly solo ride from here on in.

After descending from Kirstone Pass, the route passes by Brotherswater, through Patterdale and into Glenridding. It’s here where, if you’ve never visited the Lake District before, the view really can take your breath away. As the road hugs the shores of Ullswater, the eastern fells come into view and offer up a glimpse of just how spectacular a place we have on our doorstep. After a short respite soaking in some scenery, it’s onto the next climb of the day up to Matterdale End. This is a fairly genteel ascent by Cumbrian standards with the gradient averaging around 7%, never kicking up above 10%.

The next 30km are generally the fastest part of the course, descending from Matterdale to Troutbeck and joining the busy A66 to Keswick. It’s here where it’s always helpful to be part of a big group and save some energy for brutal terrain ahead. Unable to bridge back to the group I’d lost earlier, I rode the stretch alone, trying to tag on with other riders as and when I could. Coming off the main road and passing through Keswick town centre you begin to get a sense of the community spirit that this event is renowned for. Cheering and shouts of encouragement are par for the course along so much of the Fred Whitton route and the people at the side of the road are such a huge part of what make this event so special.

From Keswick the route heads south into the stunning Borrowdale valley, along the shores of Derwent Water. It’s at the end of this valley road where we reach the first wall of the day, Honister Pass. The road from the village of Seatoller climbs up to Honister slate mine over a 2km stretch averaging 11%, with the most brutal 25% section at the bottom and rarely relenting for the first 800m. You’d be wise not to go too deep here but rather pace the steep sections as much as 25% will allow. The middle of the climb allows some respite as the gradient eases off and the summit comes into view along with a sea of riders spread out along the road ahead.

The descent of Honister is a treacherous one, especially near the top as the road drops away from the summit with 20% gradients down towards Buttermere and the first feed station of the day. The road rolls alongside Buttermere and down into the village before kicking up again with the ascent of Newlands Pass, a stunning climb where the road hugs the fell side and offers expansive views over the Newlands valley. Another fast descent follows with a couple of extremely tight hairpin turns towards the bottom before arriving in Braithwaite. This was the first point in the ride where I as able to cruise along and get the heart rate down to an endurance level.

The climb of Whinlatter Pass comes next and it’s a stunner. A more manageable gradient when compared to the two climbs that have just gone before, Whinlatter averages 7% over 3km of ascent, and was recently used in the Tour of Britain as a summit finish. For one day of the year during the Fred Whitton it feels like I could be riding in a professional race as there are people gathering at the side of the road all the way up the climb, with a particular noisy and encouraging bunch lining the final 100m as we approach the visitor centre at the top. I feel like I’m going fairly well at this point and take the opportunity to refuel at the top with some organised support, stopping only for a minute to take on more food and drinks bottles.

I’m now past the halfway stage of the ride and the accumulated ascent is starting to bite, but the toughest is still to come. Following on from the descent off Whinlatter the route heads past Loweswater in the North West corner of the national park, one of the quieter and less visited areas. Another great thing about riding the Fred Whitton is that riders are able to see all corners of the Lake District, albeit in at a fairly brief and passing glance. Fangs Brow and then Cold Fell pass by, two lumps not noted on the route card but significant upward deviations draining yet more power from already tiring legs. Now attention quickly turns to that most feared of obstacles – Hardknott Pass.

Hardknott Pass is an anomaly, I’ve never ridden a road like it. Regularly touted as the toughest climb in the UK, it’s sustained gradients of above 30% are savage. To ride it in isolation is an achievement. To take it on after 95 miles of extremely tough riding could be considered ludicrous. The tension starts to build as you pass through Eskdale Green and see the first road signs warning drivers of the 30% gradients ahead. The valley road along Eskdale is so quiet and peaceful that it gives no indication of what’s to come, as the high hedgerows recede the road over into Cockley Beck appears on the fell side ahead. Before beginning the climb you can see the stream of riders ahead carving their way up the rugged landscape. The surroundings in this part of the Lake District are truly beautiful and once again we’d lucked out with blue skies providing the perfect backdrop.

I had no intention of racing up this climb, it was all about just making it to the top. It helps to break the climb down into 3 parts – during the first 500m or so the gradient rarely drops below 20% but then you’re given a bit of a respite as the road ‘flattens’ somewhat to around 8% for the next 1km. Then the real fun starts. The final stretch to the top kicks off with a set of 30% hairpins that defy logic. To get through this section is incredibly tough and takes a real balance of pulling with the arms and pushing through the pedals with every fibre of your being. It was fairly quiet in terms of riders when I made it through this point and was able to pick a favourable line up the steepest sections and finally gather myself as the gradient eases off towards the top of the climb. Just to make it to this stage of the Fred Whitton gives an immense sense of achievement, a feeling amplified by the great people who were stood at the side of the road on the climb who through their shouts of encouragement help you dig deeper than you ever thought possible.

Once over the top of Hardknott the descent offers up yet another challenge, getting down safely through the tight hairpins and 30% drop-offs really test your concentration. Riding along Cockley Beck I begin to cramp up, but I’ve still got Wrynose and Blea Tarn to get over. I unclip my legs one at a time and give them a bit of a shake out and tell myself it’ll help, and maybe it does. I felt OK going over the final two climbs and once into Langdale I know there’s just around 10km of mostly flat road to the finish. I managed to tag on with a couple of other riders and we pulled each other along the final stretch.

Crossing the finish line back in Grasmere we’re greeted one last time by shouts of well done from huge crowds and the fantastic volunteers. Riders gather in the marquee tent for a much needed post-ride meal and congregate on the grass as a live band plays. Now is the time to reflect on the 114 miles that have gone before and we all share our experiences of the day, everyone has their own most memorable moment of hurt (invariably around the 95 mile mark). The support on the road and sense of community that this event generates is unrivalled. The organisers and volunteers deserve huge credit for repeatedly providing the foundations for what is a truly special day on the bike.