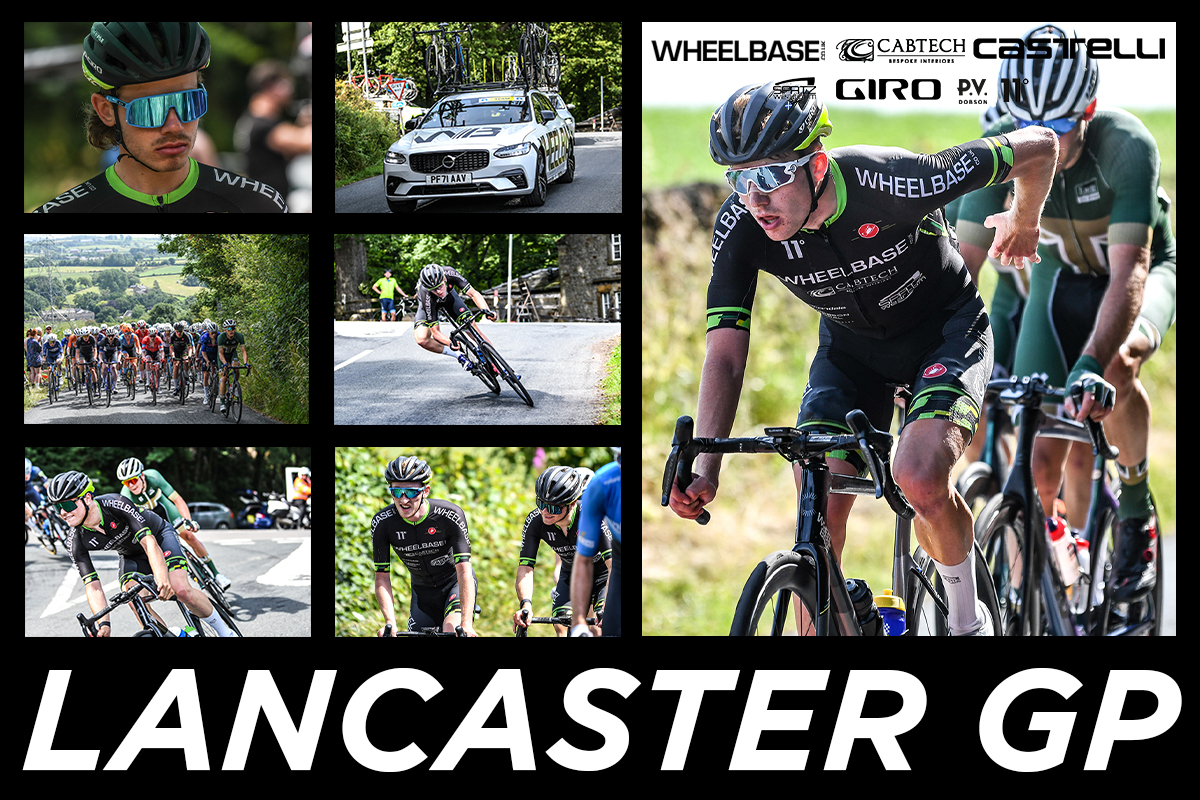 Elite road racing came to Lancaster with Round 3 of the British Cycling National Road Series taking place on Sunday the 17th of July. The popular Lancaster Grand Prix is considered to be Wheelbase Cabtech Castelli’s ‘home race’ being just half an hour down the M6 from Wheelbase HQ in the south of the Lake District. The city of Lancaster has a really healthy cycling scene and this important road race is well supported by the local cycling clubs as well as having the local council firmly behind the race, meaning that a ‘proper day out’ is made out of the event, with a full day’s entertainment at the start and finish line which is located in the stunning Williamson Park in the shadow of the iconic Williamson Memorial which looks out over the city below. 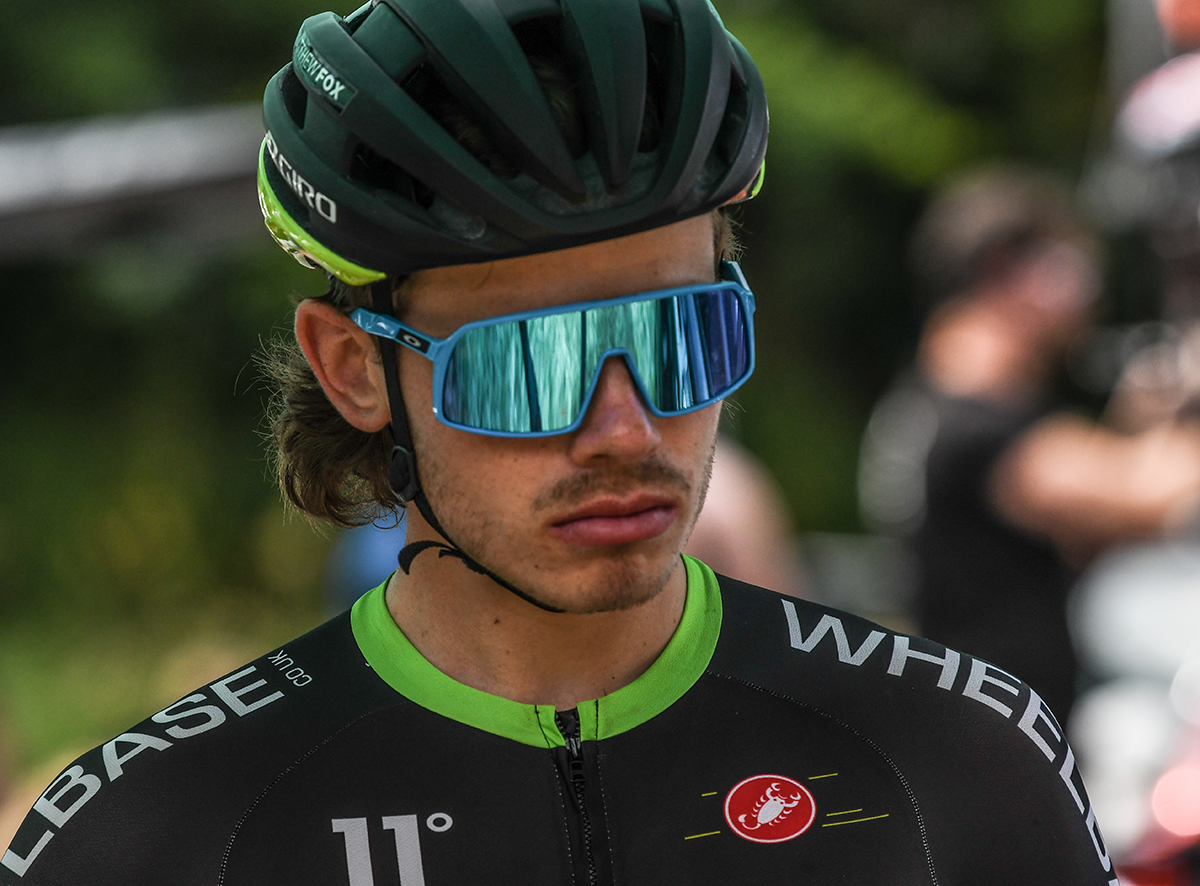 Matt Fox looking cool, calm and collected before the race, despite the heat! Photo: Ellen Isherwood Tom Merry was ready to compete in the hottest race of the year. Photo: Ellen Isherwood.

With temperatures climbing up to 28 degrees the race circuit hosted plenty of roadside spectators, who were enjoying the fantastic weather, sitting in the sun while cheering on the racers who were passing by in full flight. It goes without saying that the riders were somewhat less comfortable and as the day of racing progressed it became clear that keeping as cool as possible, staying on top hydration and ensuring electrolytes were regularly replaced, was going to be as important as the unusual mid-race strategizing. Special mention goes to the family who had rigged up their jet wash to produce a fine spray over the riders as they passed through a residential area on the course, it’s safe to say that every race finisher appreciated that gesture! 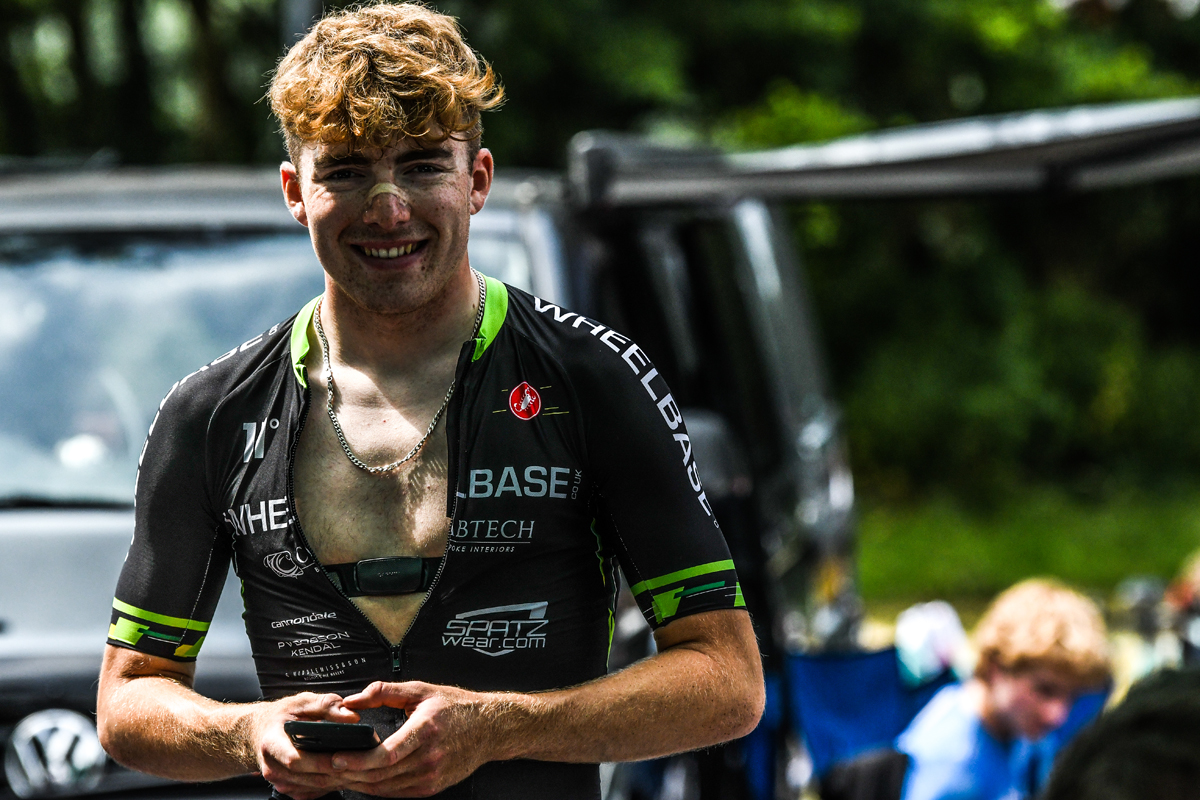 Logan Maclean, back from a short stint of training in the French Alps, came into the Lancaster GP with good form. Photo Ellen Isherwood 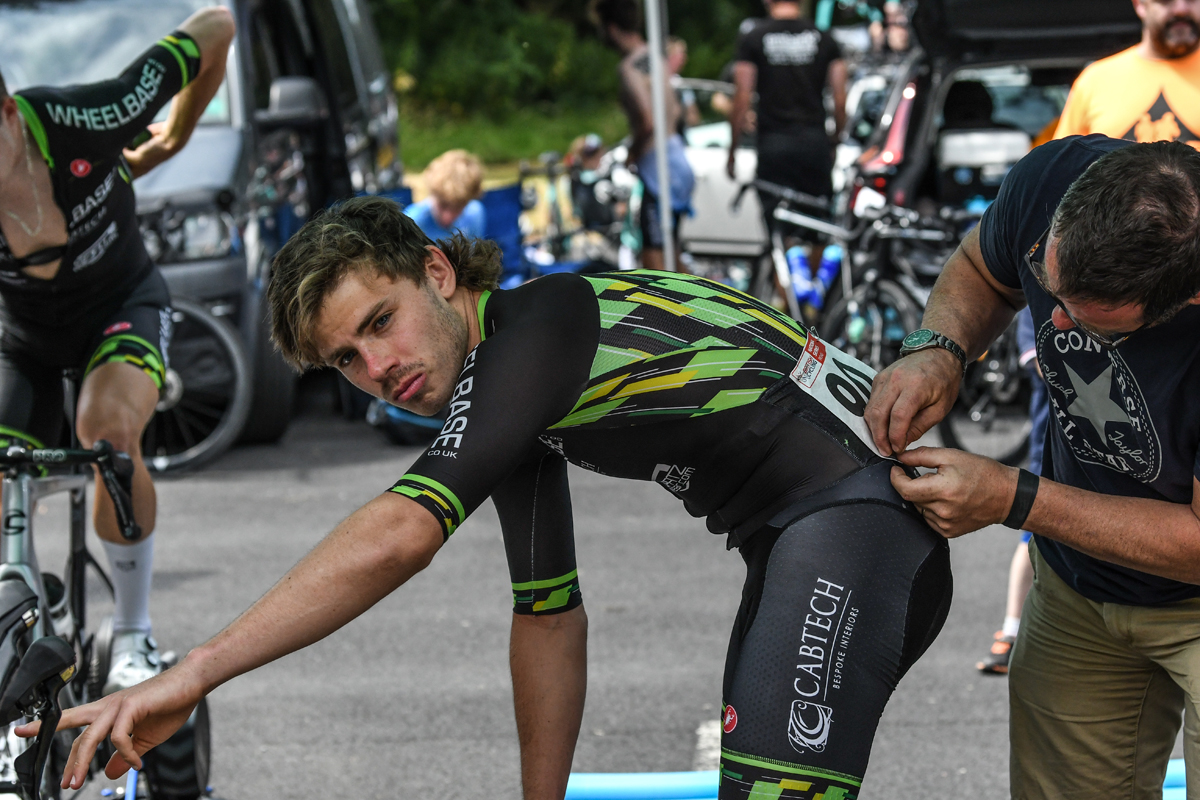 It’s time to pin on the numbers and get racing! Photo: Ellen Isherwood

The men’s race rolled out of Williamson Park at 2pm just as temperatures reached the high point of the day; dense crowds who were enjoying a cracking day in the park cheered the racers off as they embarked on 10 grueling laps of a circuit that would be difficult enough on a cooler day. This testing circuit includes short sharp climbs, long exposed high-speed roads that are susceptible to strong winds and fast, sweeping descents. It’s a fairly short loop and due to the repetitive and technical nature of the course there’s very little opportunity to feed or take on drink as riders are either sprinting uphill or negotiating fast, unpredictable descents. It was obvious from the get-go that struggling to stay hydrated and suitably fueled on such an attritional day was going to affect the outcome of the race. 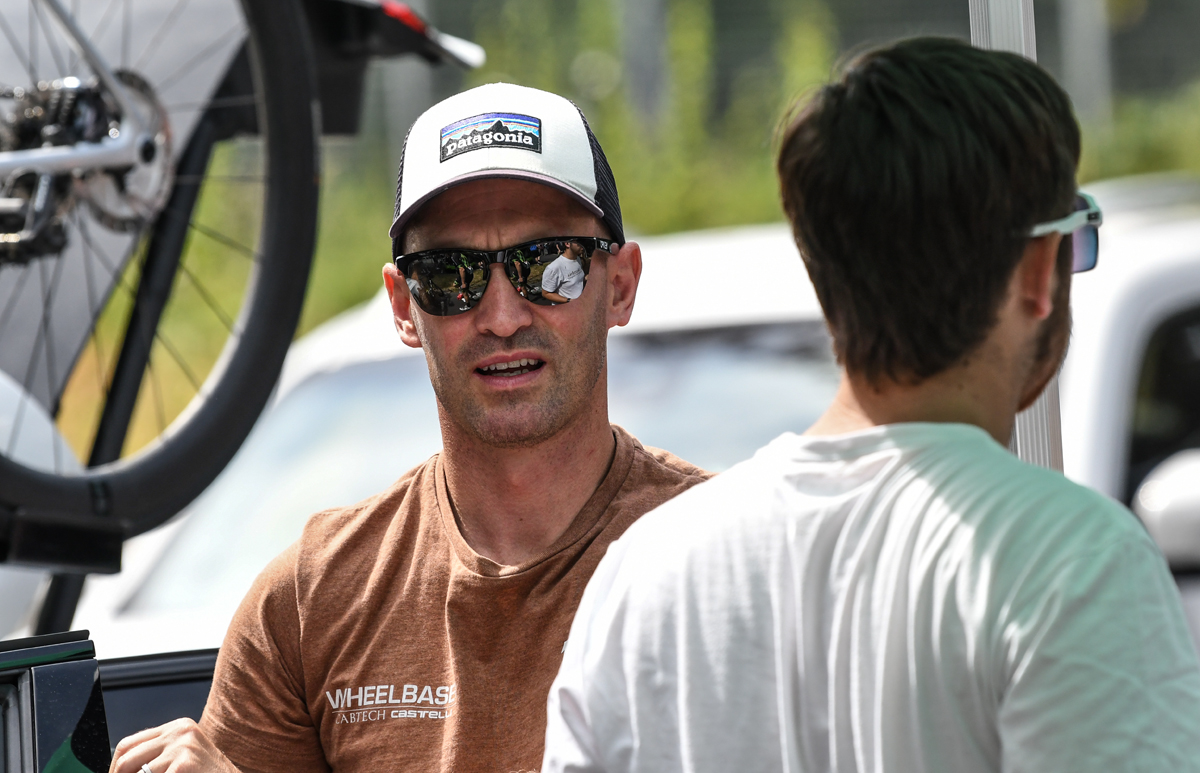 Matti Dobbins ensured he was well-hydrated before the race. Photo: Ellen Isherwood

Wheelbase Cabtech Castelli were able to field a complete team, which came as a relief following the recent rider health issues, as the whole peloton continues to feel the affects of Covid. After strong showing from a reduced team at the Stockton GP it was good to go into this race with a full squad, although a number of our riders had already raced hard on Friday evening at a round of the National Circuit Series in Barnsley which saw our riders at the front of the race with Callum Thornley taking an excellent 5th place and Matt Fox taking 12th place; this would mean that there would be some fatigued legs going into the Lancaster GP, however confidence was high. 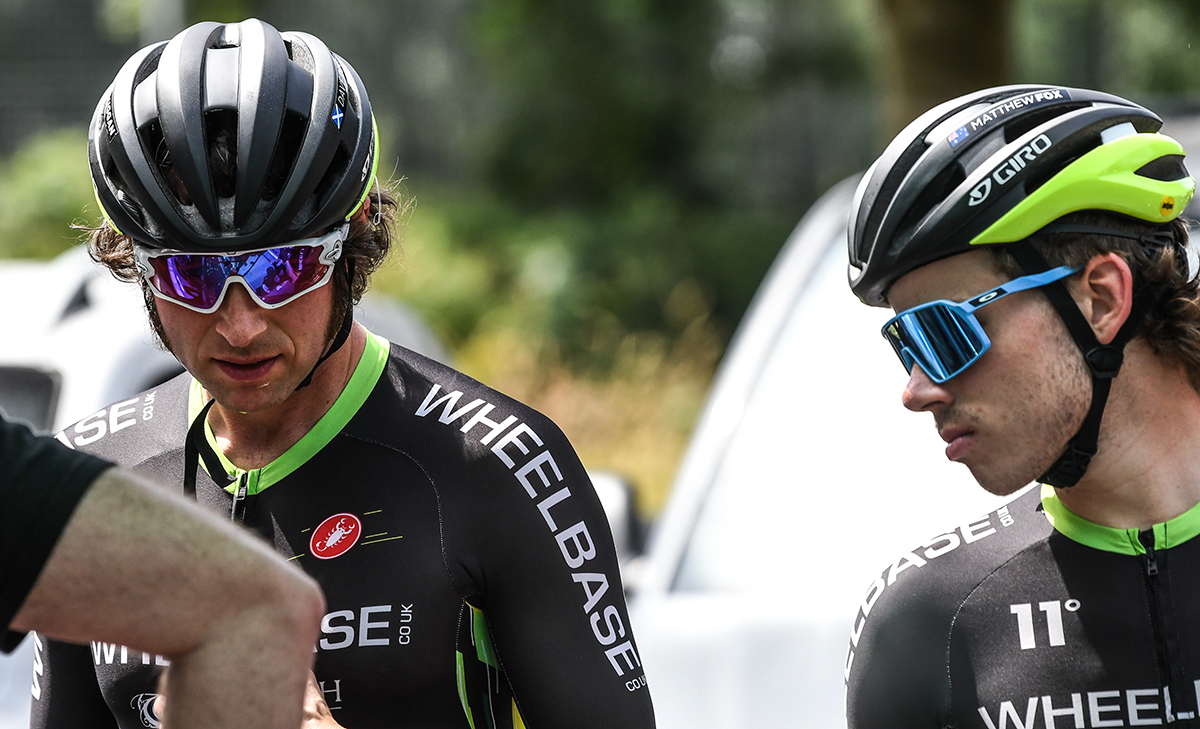 Dave Duggan had made the long trip from Aberdeenshire to represent Wheelbase on our home roads. Photo: Ellen Isherwood 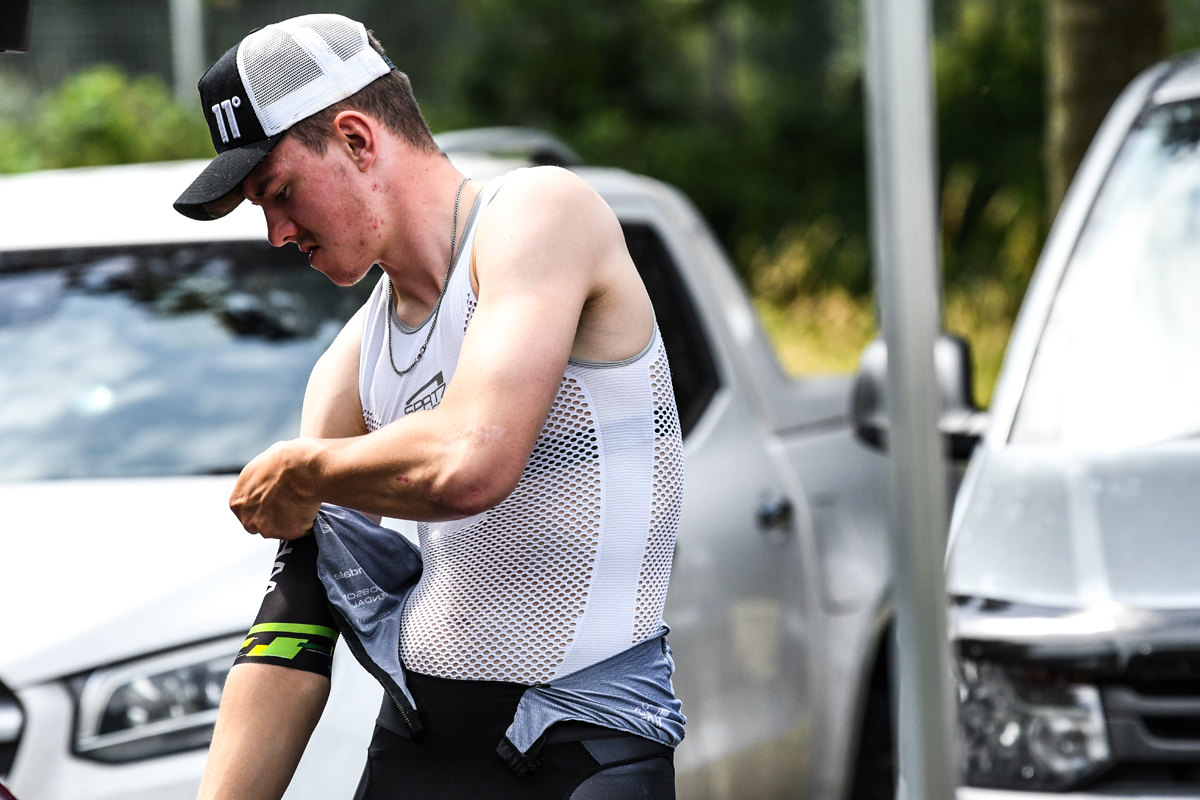 Callum Thornley came to the Lancaster GP on an amazing run of form, with his most recent result being 5th at the Barnsley Criterium. Photo: Ellen Isherwood

Out onto the fast, unrelenting circuit the peloton of 140 riders stayed tightly packed for the majority of the first lap, taking in the main climb together before the first moves of the day were made. On lap two the race quickly became animated and we were stoked to see our young Scottish lad Logan Maclean had made it into a breakaway group of 6 riders who quickly carved a 30 second lead on the chasing bunch. The nature of this demanding circuit was always going to shape the outcome of the race and true to form the chasing bunch began to break up into smaller packs as the hilly roads stretched them out and gaps between riders failed to be closed. 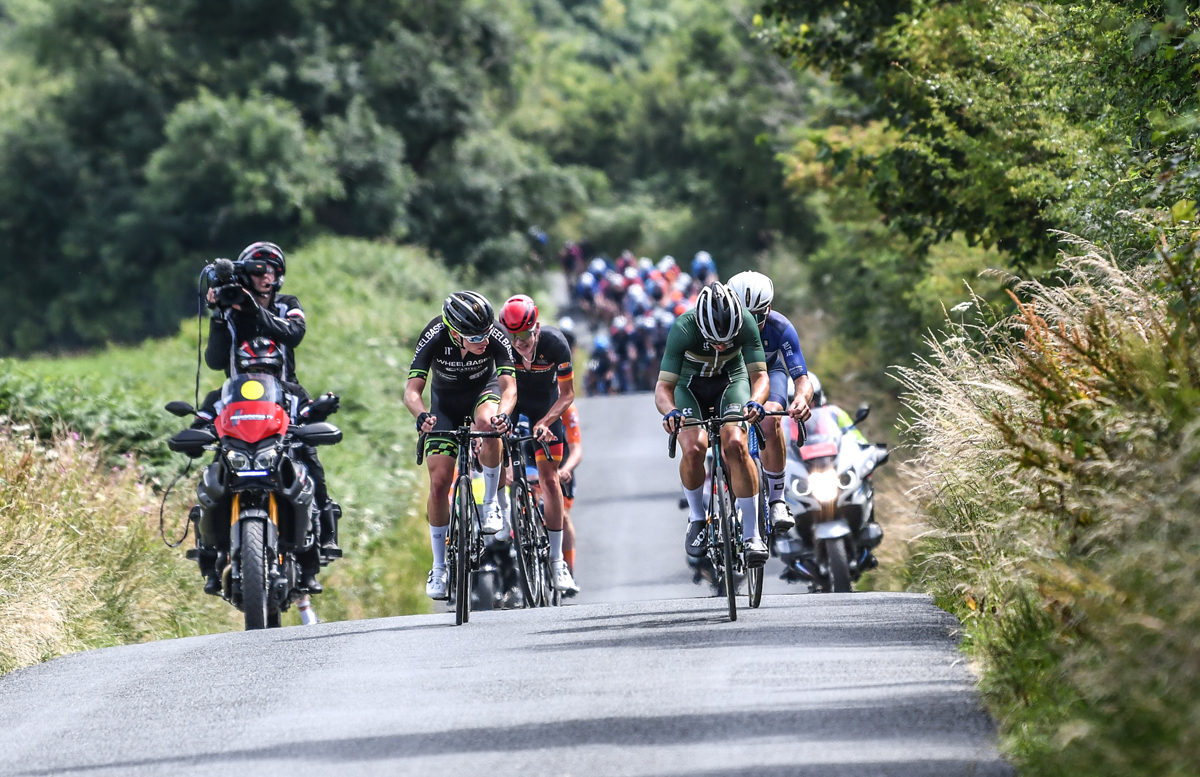 Tightly packed, the chasing bunch stay together on the main climb of the circuit. Photo: Ellen Isherwood 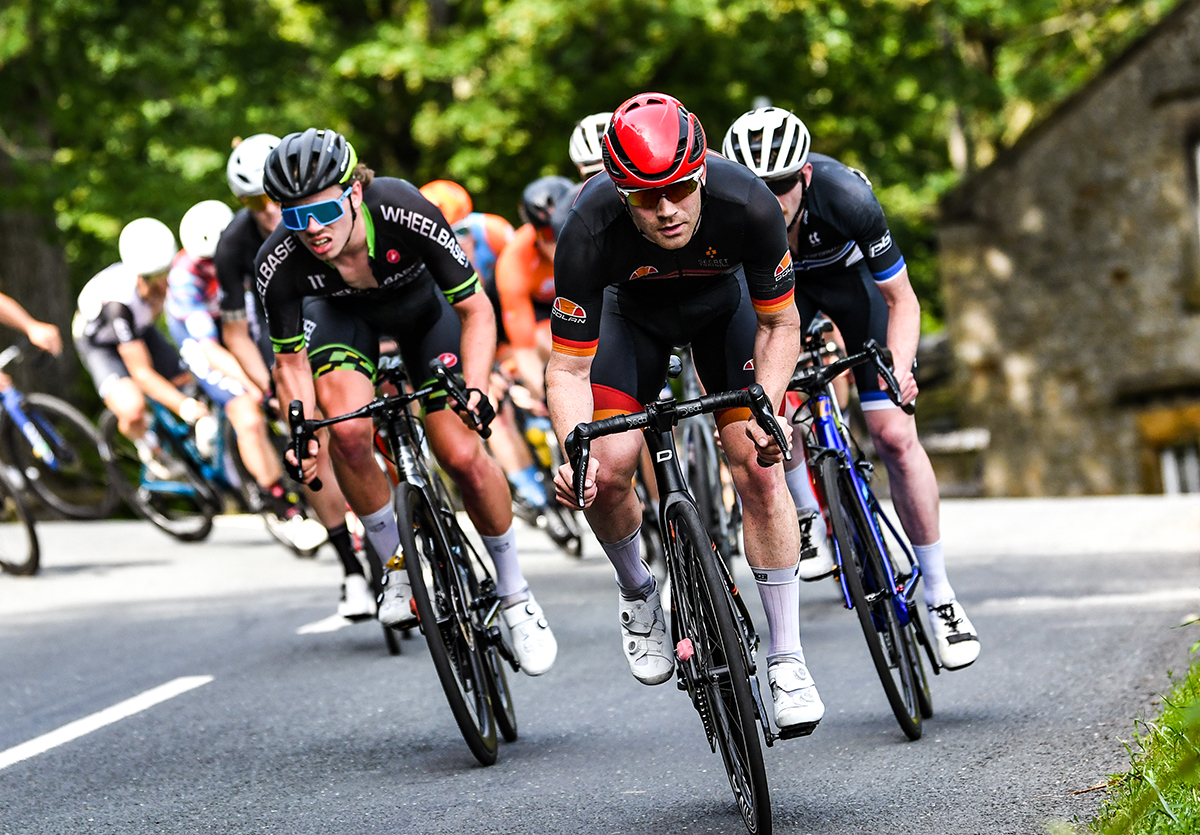 Standing on the roadside it was clear just how difficult the racing conditions were, with the heat bouncing off the road and riders looking very uncomfortable early in the race. The feed area was kept busy each lap, with team helpers passing out electrolytes to consume and water to douse over themselves. Roadside helpers employed lots of clever ways to help keep their riders cool, including passing out ice bags for riders to stick down the back of their jerseys. As the chasing groups continued to break apart Logan’s leading group of six riders was joined by another five riders, this helped the individuals in the break pace their efforts a little better between turns of the front to help hold the pace. 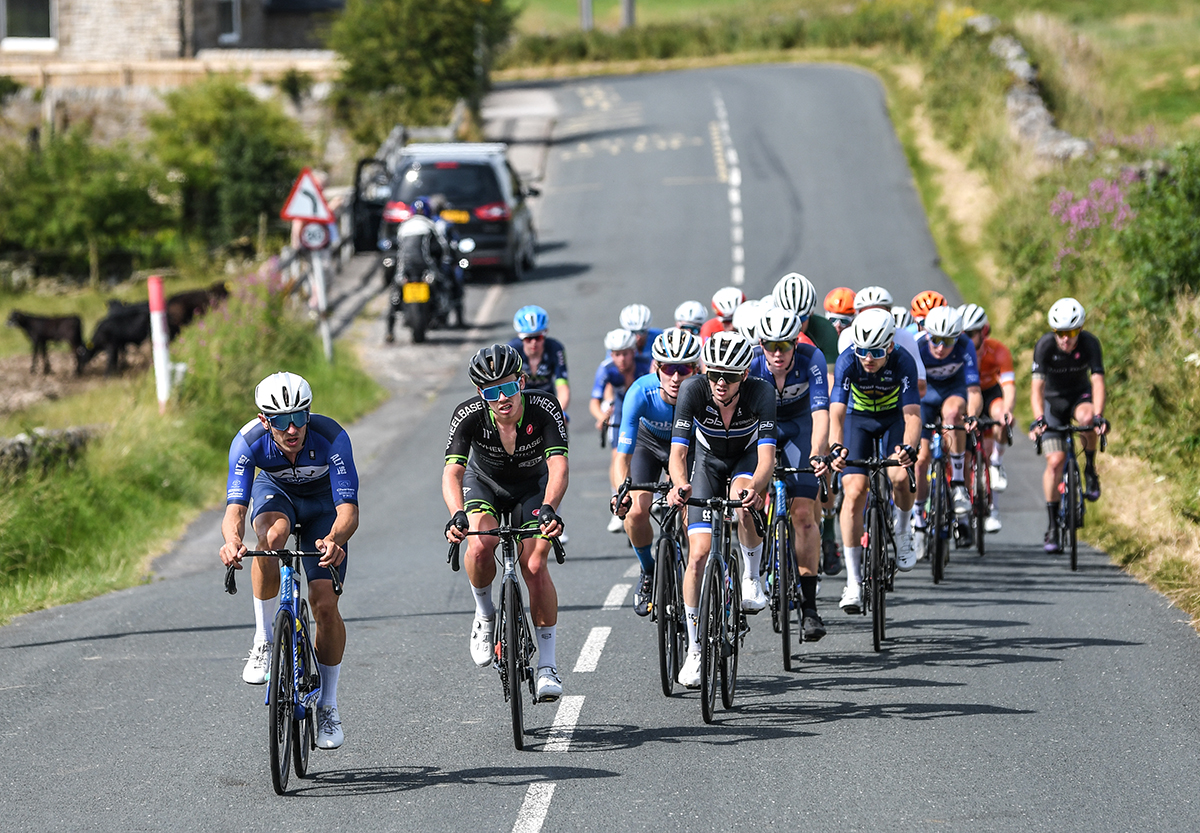 The heat was bouncing off the road throughout the race. Photo: Ellen Isherwood 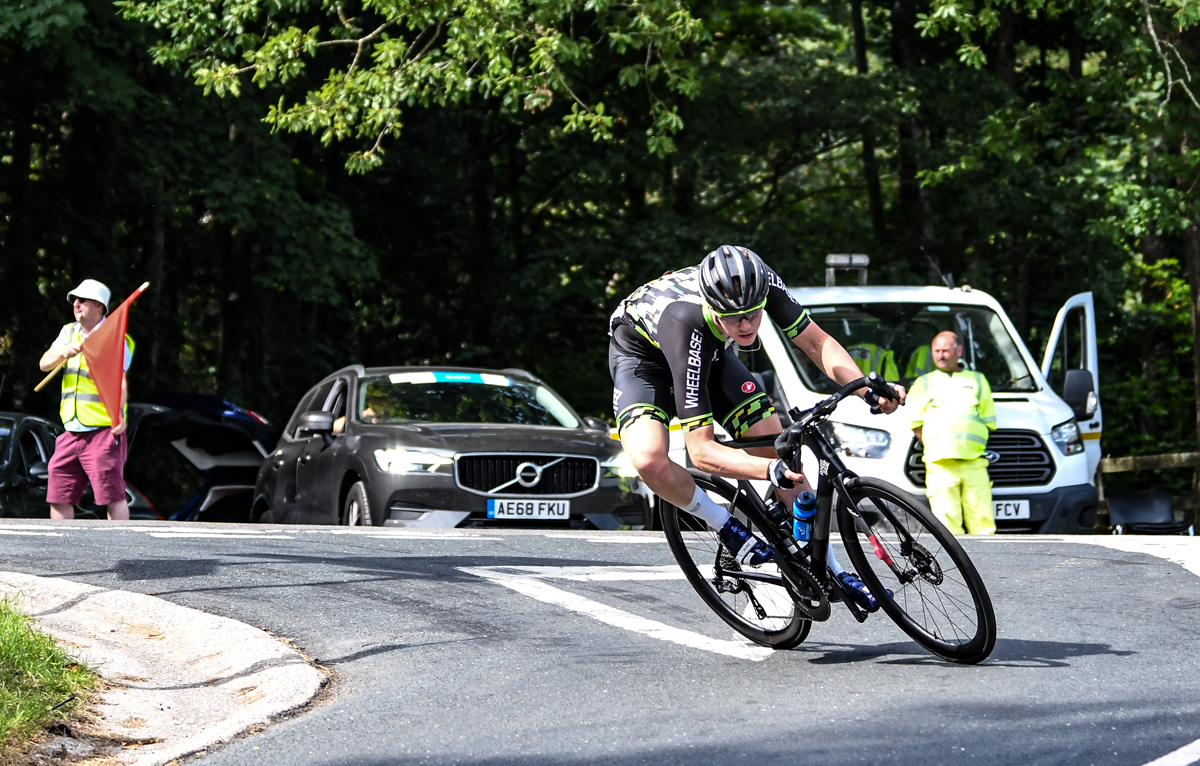 Tom Merry found himself in an ever-decreasing group of riders, as more and more racers succumbed to the heat. Photo: Ellen Isherwood

As the race hit its mid-point temperatures topped out at 30 degrees and the Wheelbase Cabtech Castelli team was scattered throughout the reduced, fragmented field; each of our riders was in a personal battle to stay suitably hydrated but the struggle was considerable. Meanwhile in the team car our Director Sportif Stu Reid and Team Manager Toby Dalton were helping to ensure that Logan was staying well-fueled and was drinking plenty of fluids, although as they drew level with him to do so, the salt deposits on his kit was evidence of just how demanding this race had become. 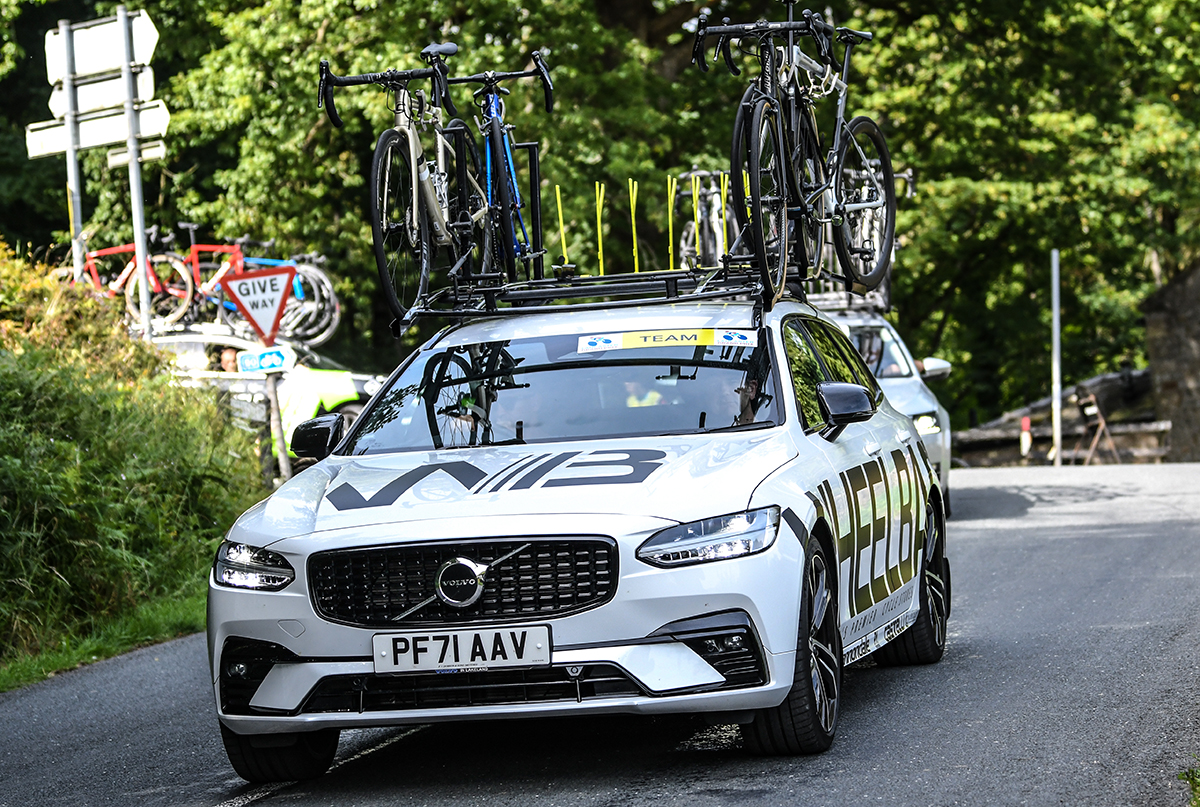 The Wheelbase Cabtech Castelli team car sponsored by PV Dobson was on hand to support our racers. Photo: Ellen Isherwood 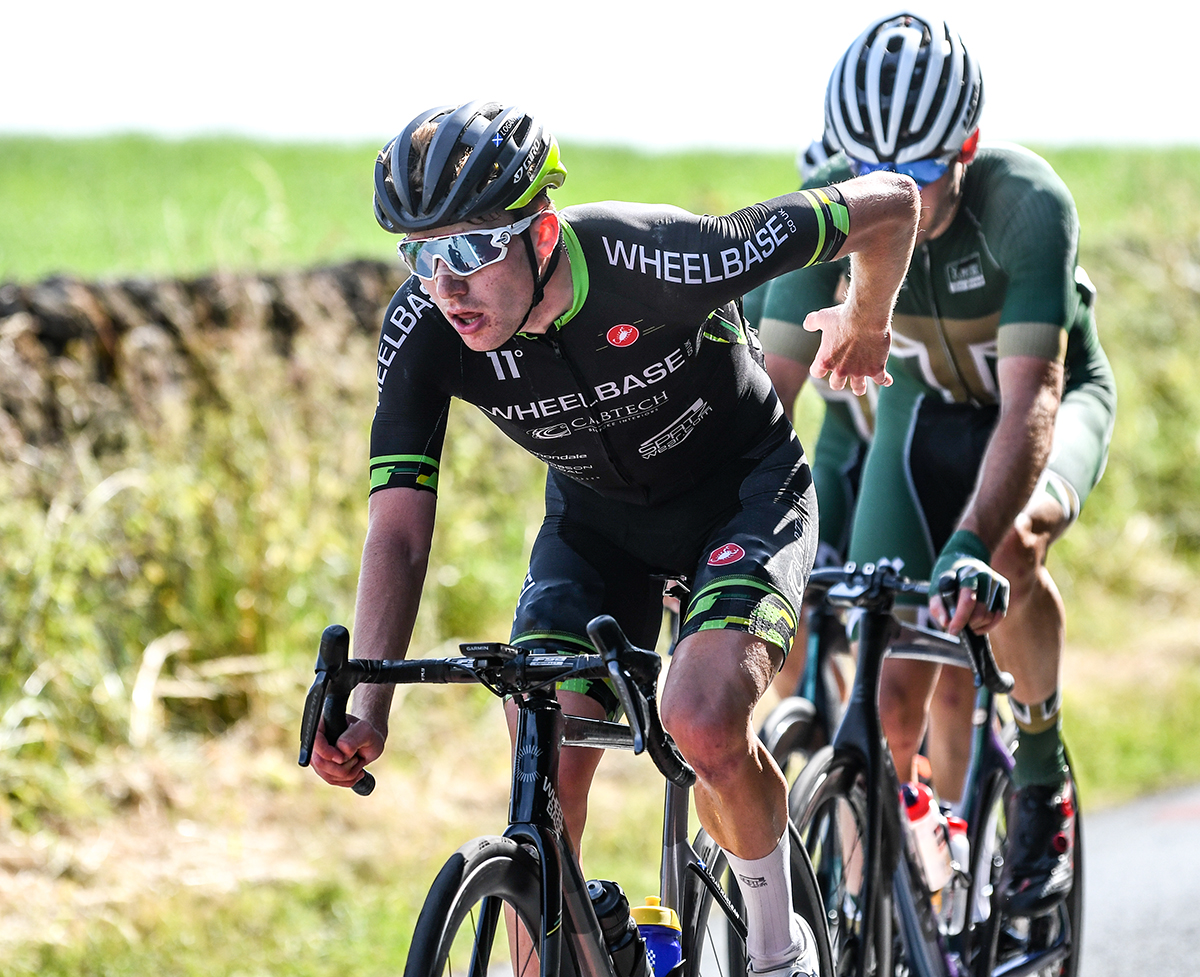 Logan continued to race smart while focusing on staying hydrated and keeping as cool as possible. Photo: Ellen Isherwood 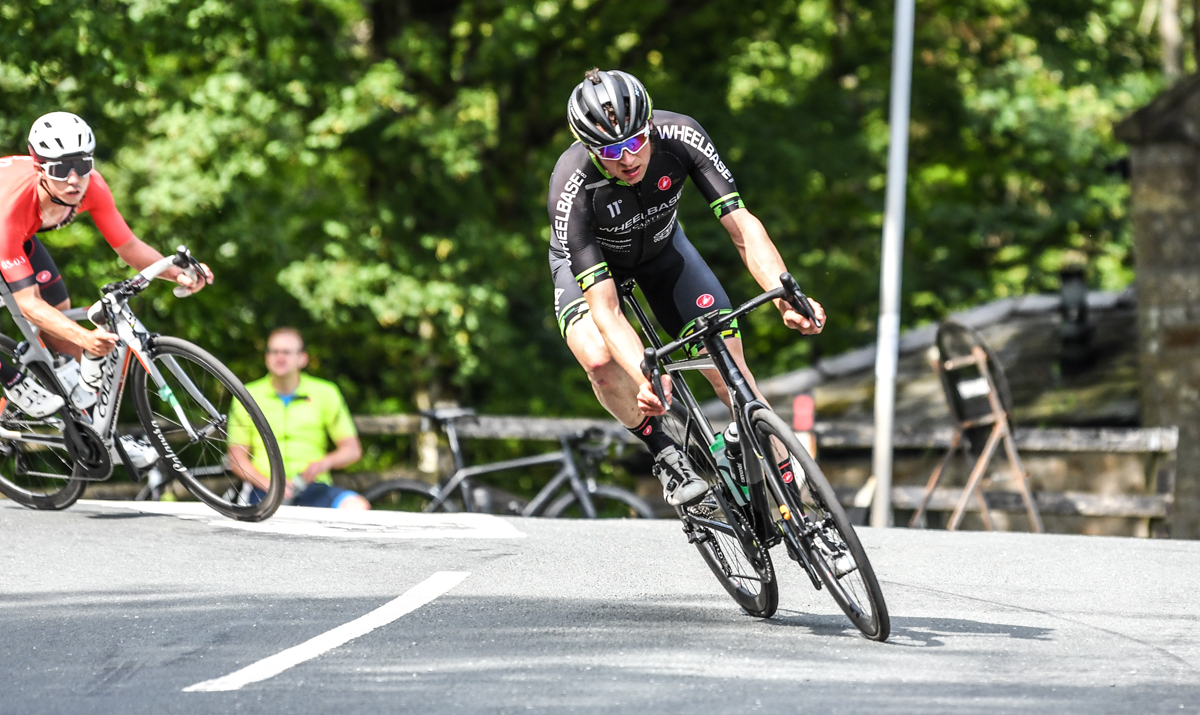 In the latter half of the race a quick head count of the Wheelbase Cabtech Castelli team revealed that Logan Maclean and our Aussie kid Matt Fox were our only remaining representatives in a race which was seeing an ever-depleting field of riders. Logan was still positioned in that front group, riding intelligently by contributing to the pace while also conserving as much energy as possible on the tough climbs and long exposed stretches of road. Meanwhile Matt was positioned in what was left of the chasing bunch, thinking of his overall position and the potential for team points and our Wheelbase Cabtech Castelli standing in the rankings. 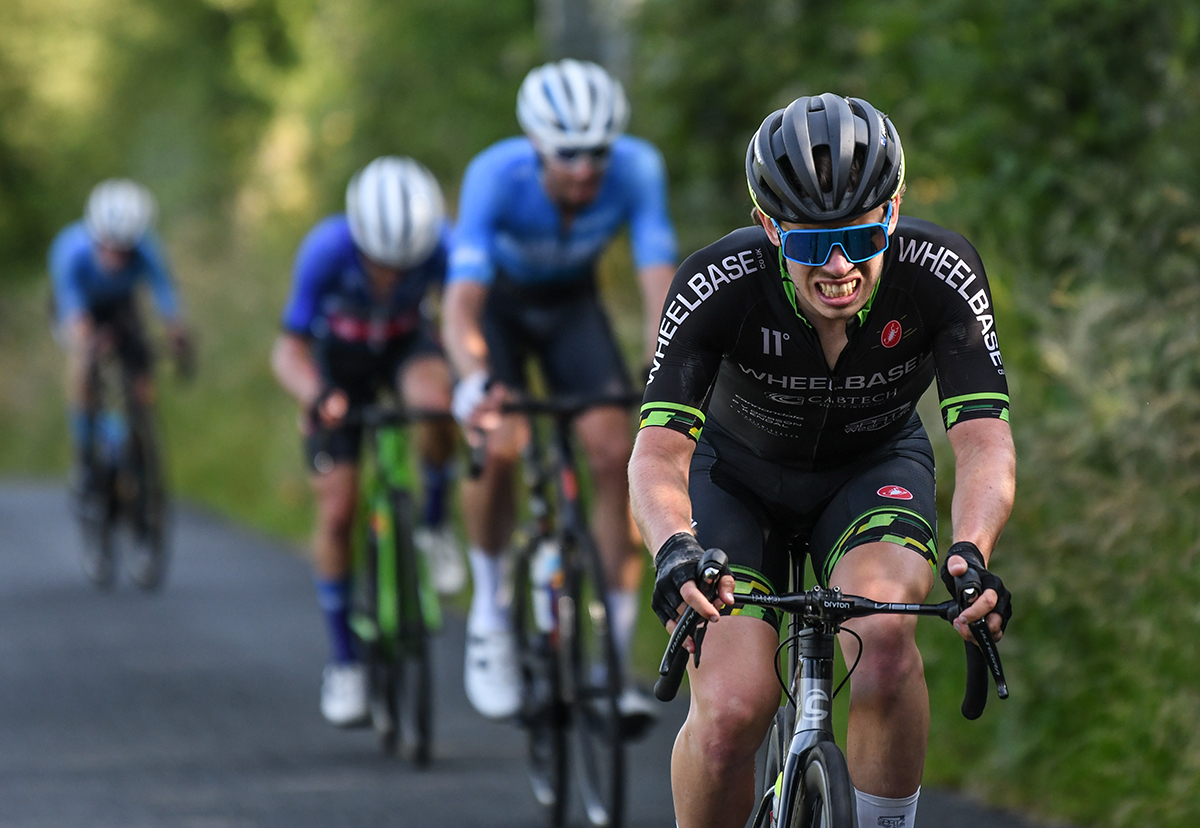 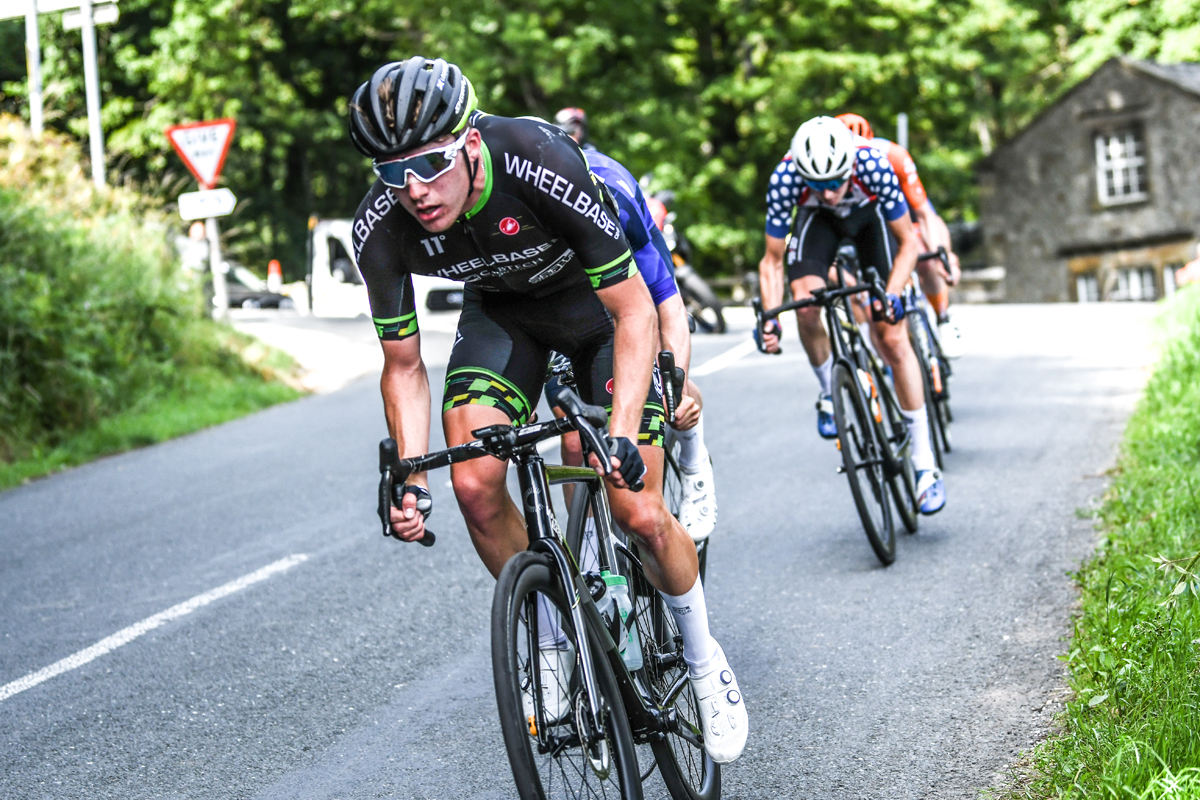 Logan continued to race intelligentially and dose his efforts in the breakaway group. Photo: Ellen Isherwood

In the final two laps of the race the lead group inevitably began to break up with riders beginning to fatigue and simply focus on going the distance rather than racing for the win. At this point our focus moved towards Logan finishing as highly up the results as possible and credit to the lad he ensured he kept well-fueled and hydrated, measuring his efforts before the final approach back into the glorious finishing line venue in Williamson Park. Upfront Robert Scott from the WiV Sungod team took the win after riding away from that small remaining group of riders. Shortly after the riders from the original break came over the line with Wheelbase Cabtech Castelli’s Logan Maclean taking an excellent 12th place; this result cannot be underplayed and is a reflection of just how talented this young rider is, taking a high placing by racing intelligently throughout the most grueling race of the year. Matt Fox stayed with the remains of the chasing group and took a great 17th place, proving once again that he’s capable of going the distance and finishing high up in National level road races. With 140 starters and only 34 finishers these results speak for themselves, with our hard-working duo proving that Scottish tenacity and Aussie grit are powerful weapons against adversity! Logan Maclean would finish in an excellent 12th place after being in the break for almost the entirety of the race. Photo: Ellen Isherwood As our Wheelbase riders succumbed to the difficult racing conditions they stayed at the side of the road to cheer on their teammates. Photo: Ellen Isherwood

We’re incredibly proud of how the whole team performed at the Lancaster Grand Prix; it’s a real credit to the team that once each rider was overcome by the conditions they stuck around to assist at the feed area, helping the remaining Wheelbase Cabtech Castelli riders stay fully hydrated. Special thanks to all of the team behind the scenes involved in keeping our team riders racing and thanks to our young squad for representing us so well on our home roads. A HUGE thanks to everyone involved in the Wheelbase Cabtech Castelli team. Photo: Ellen Isherwood

All photos by Ellen Isherwood