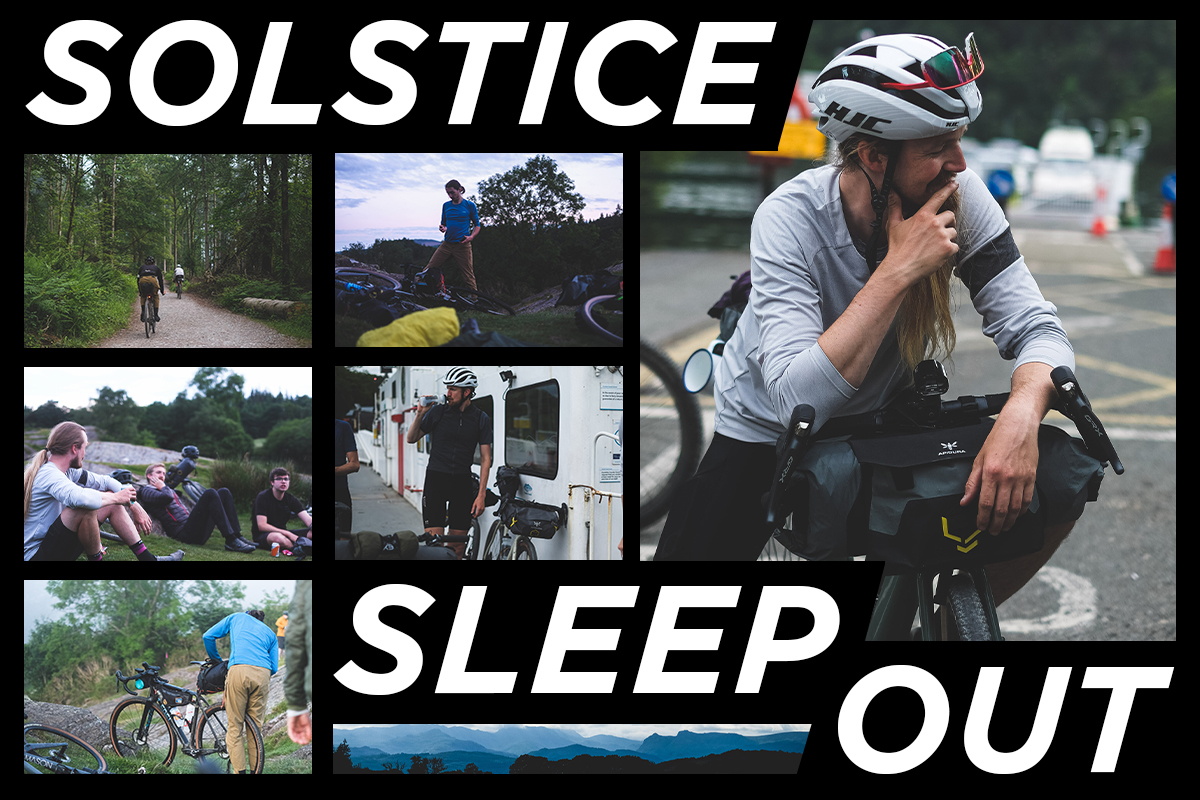 Andrew Barlow and his Bikepacking crew, made up of Wheelbase staff and other local riding buddies got together for a Summer Solstice micro-adventure. The plan was simple – head out for a ride; watch the sunset, bivvy out for the night and cruise straight back into work the next morning..

We headed out straight after work from Wheelbase HQ in Staveley in the Lake District on a Summer Solstice micro adventure. With warm temperatures, dry & dusty trails and the shortest amount of darkness of any night of the year camping out with the crew was a no-brainer. 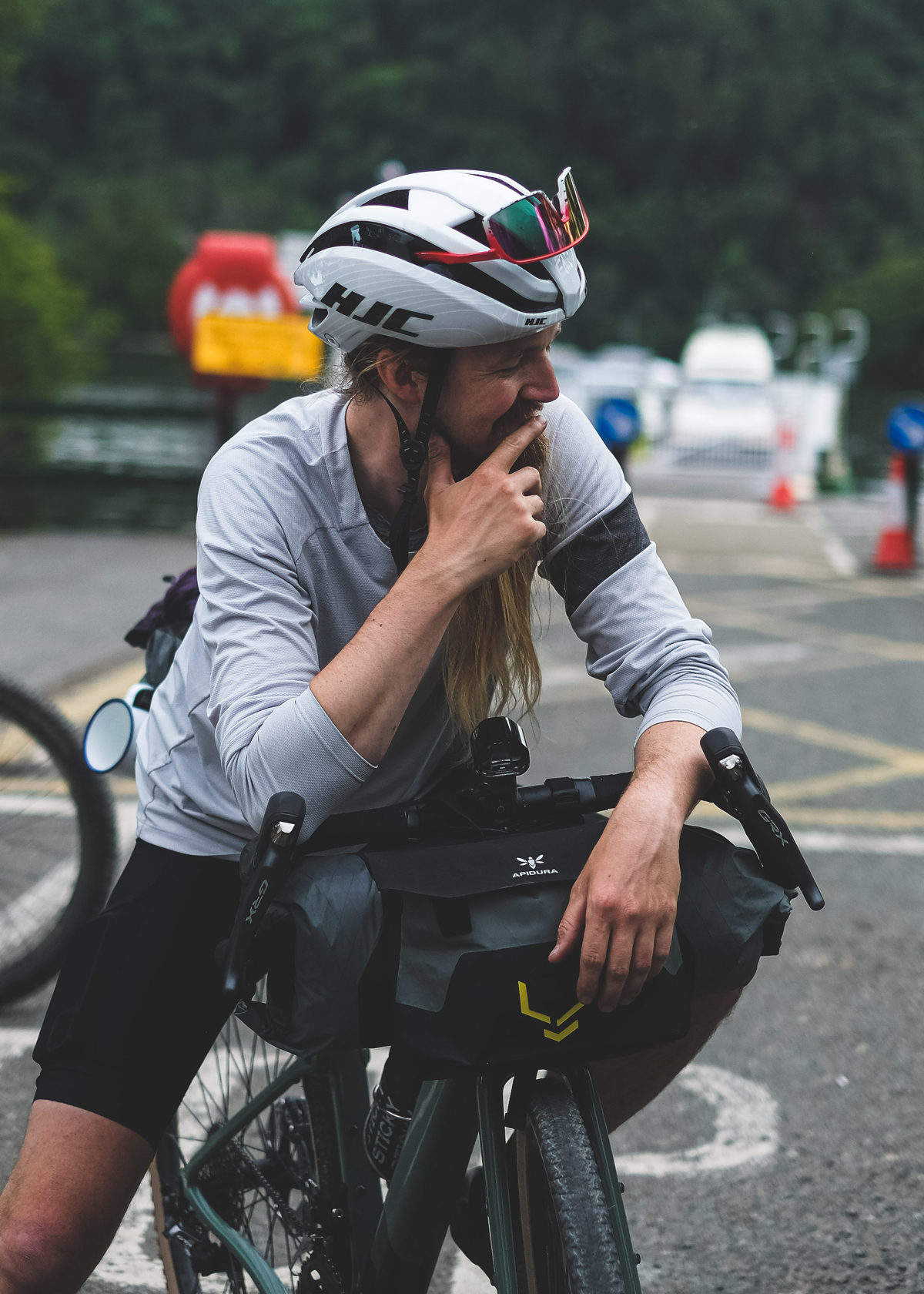 Straight out of the door of Wheelbase Lake District to a Bikepacking micro-adventure.

So, what is summer solstice’s significance I hear you ask. Well, In Northern and Central European Neolithic cultures, the summer solstice may have been related to timings of crop cycles. It was typically marked by Celtic, Slavic and Germanic people by lighting bonfires, intended to boost the sun’s strength for the remainder of the crop season and ensure a healthy harvest. Numerous Neolithic stone circles also appear to have been built around the movement of the sun at solstices, there’s a multitude of them here in the Lakes although, as there are no written accounts from the time period which is quite unfortunate however it did begin around 12,000 years ago! 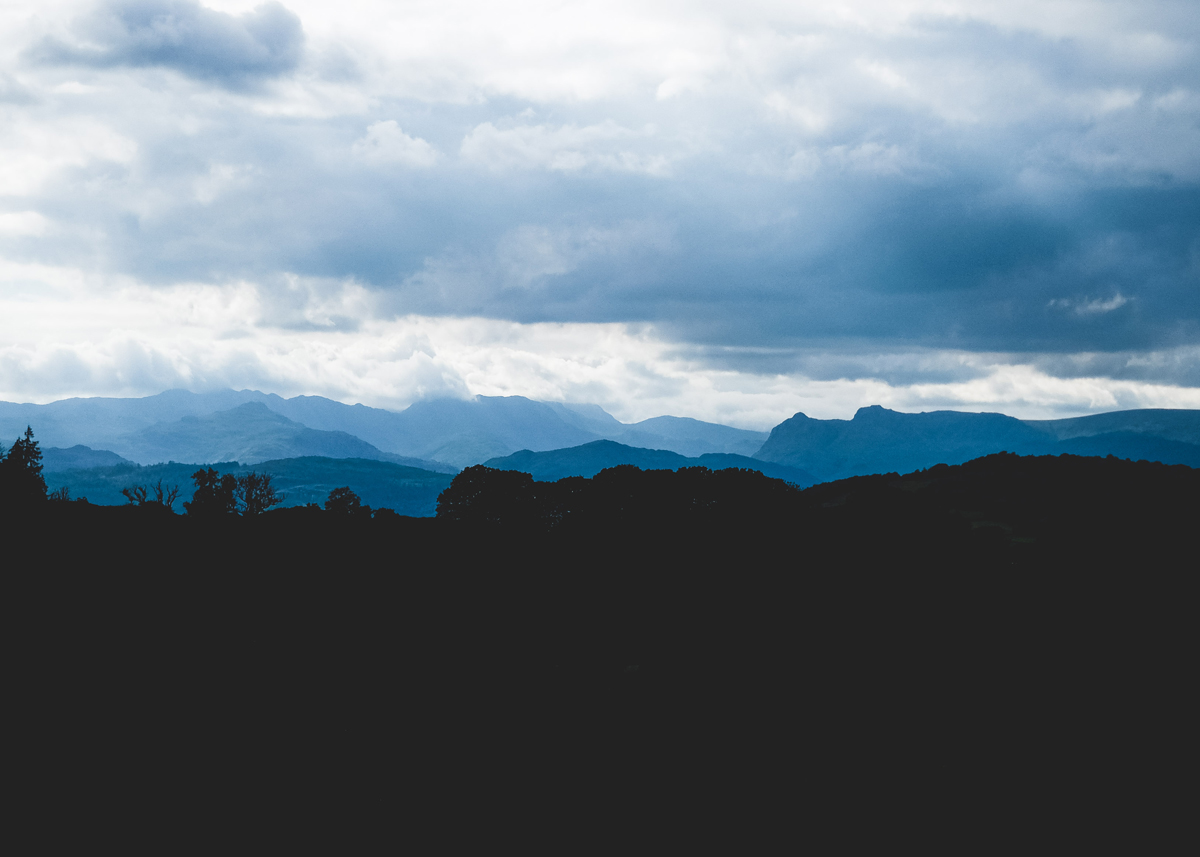 Dry, warm conditions and the longest hours of daylight of the year made for a great riding and wild-camping opportunity. 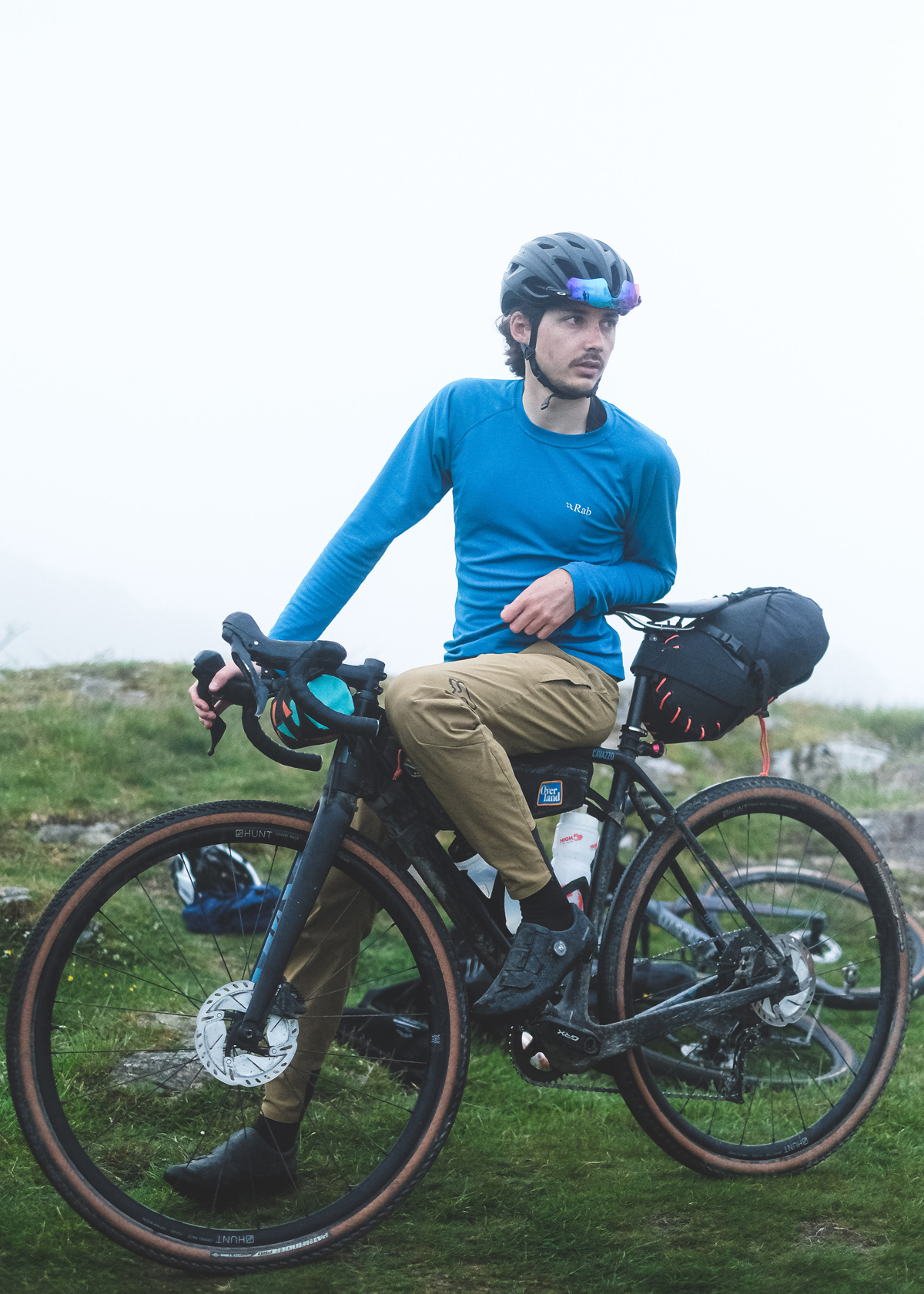 We headed west, over Lake Windermere via the ferry and along Claife Heights, sitting pretty around 177 meters above sea level where we were treated to great views of the surrounding fells. A mixture of rolling countryside, plantation, quaint tarns and  ancient woodlands presented us with plenty of good options for a wild camp. Everyone in my riding group is already well-versed, however it’s worth reinforcing – that we all observe the ‘leave no trace’ principle when wild camping in the Lake District. 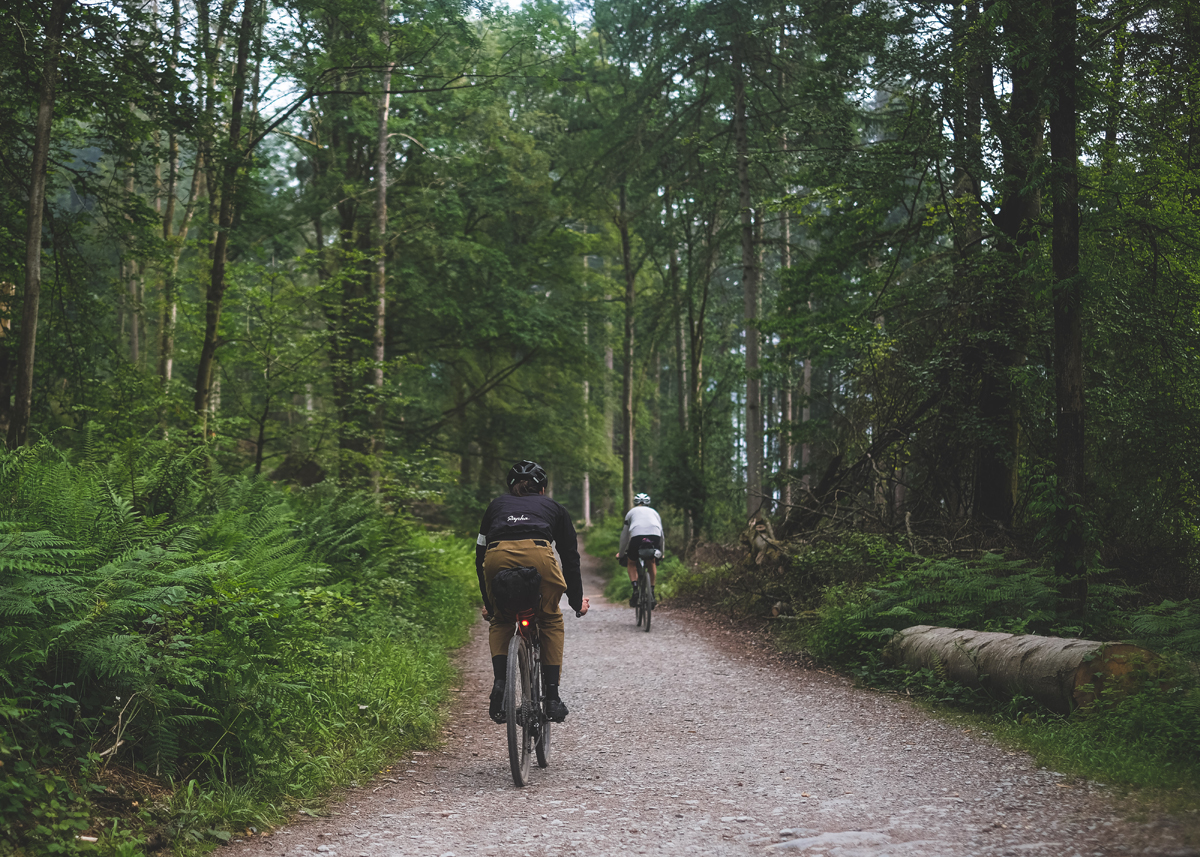 The Claife Heights trail alongside Lake Windermere made for a great gravel bike ride. 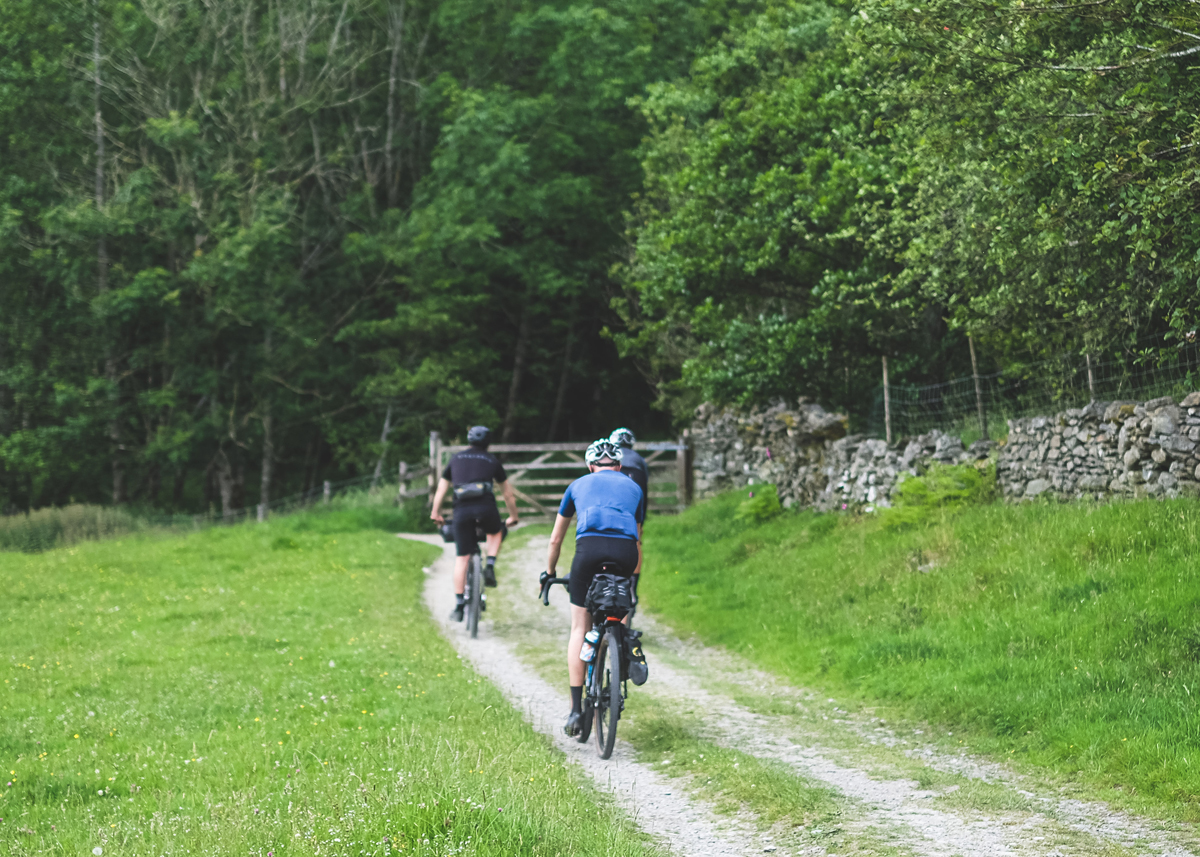 The Summer Solstice ride was an opportunity for friends to get together and celebrate the longest day of the year.

A perfectly still evening meant a dip in the tarn to cool off from one of the hottest rides of the year was in order, followed by a couple of cold beverages with the boys and girls to wind down and watch the Summer Solstice Sun set. The next morning we all awoke to a chorus of geese on the tarn. The cloud had descended which left us in a sea of mist and fog for a moody, really atmospheric start to the day. 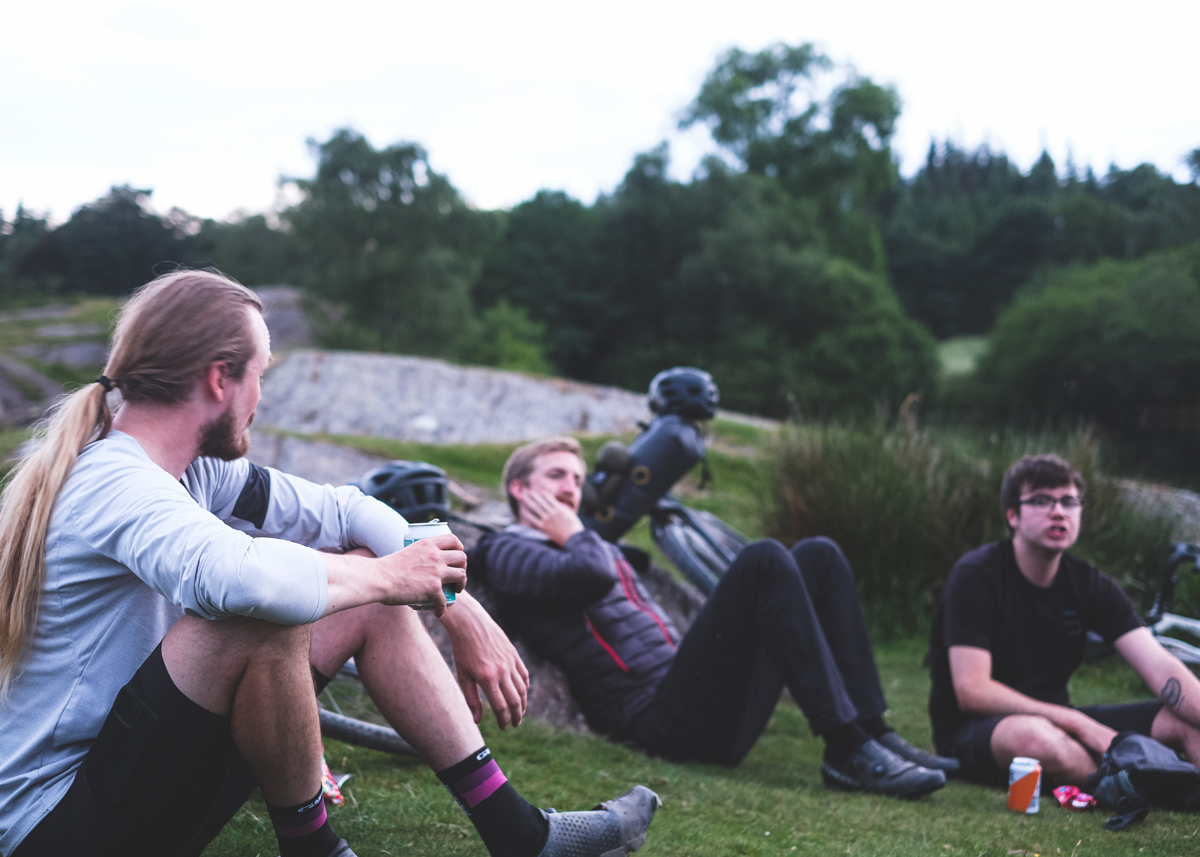 The Solstice ride was a laidback affair, with gravel riding, tarn swimming and beer supping filling the group’s evening. 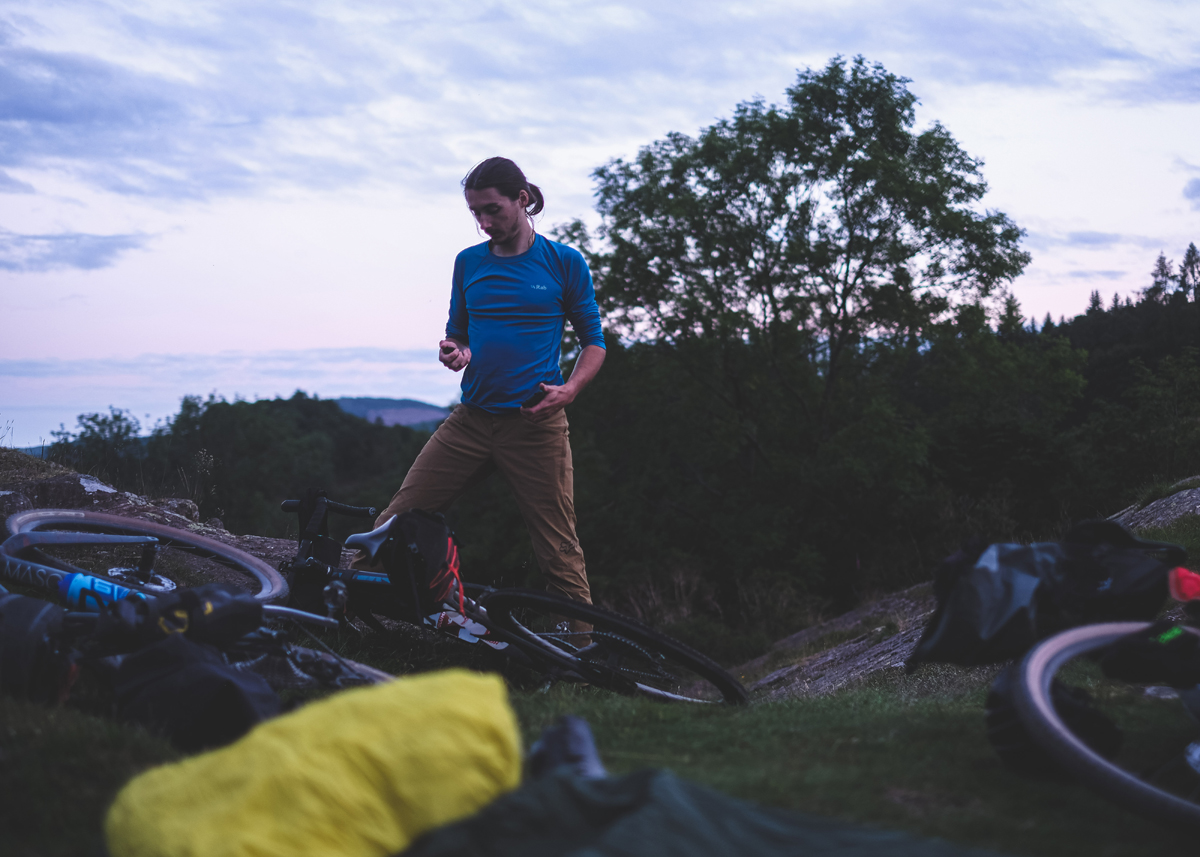 The Solstice Sleep Out coincided nicely with a dry spell of weather in the Lake District.

We packed the bikes back up, holstering our bivvy bags, sleeping bags and the luxury items we had decided to bring with us, not forgetting to leave no trace, collecting our rubbish and some more that was already there (good karma) then descended to the ferry to make our way back across Lake Windermere to arrive at work in a timely manner but mainly making sure that we had time to have breakfast at the fabulous More Bakery of course! 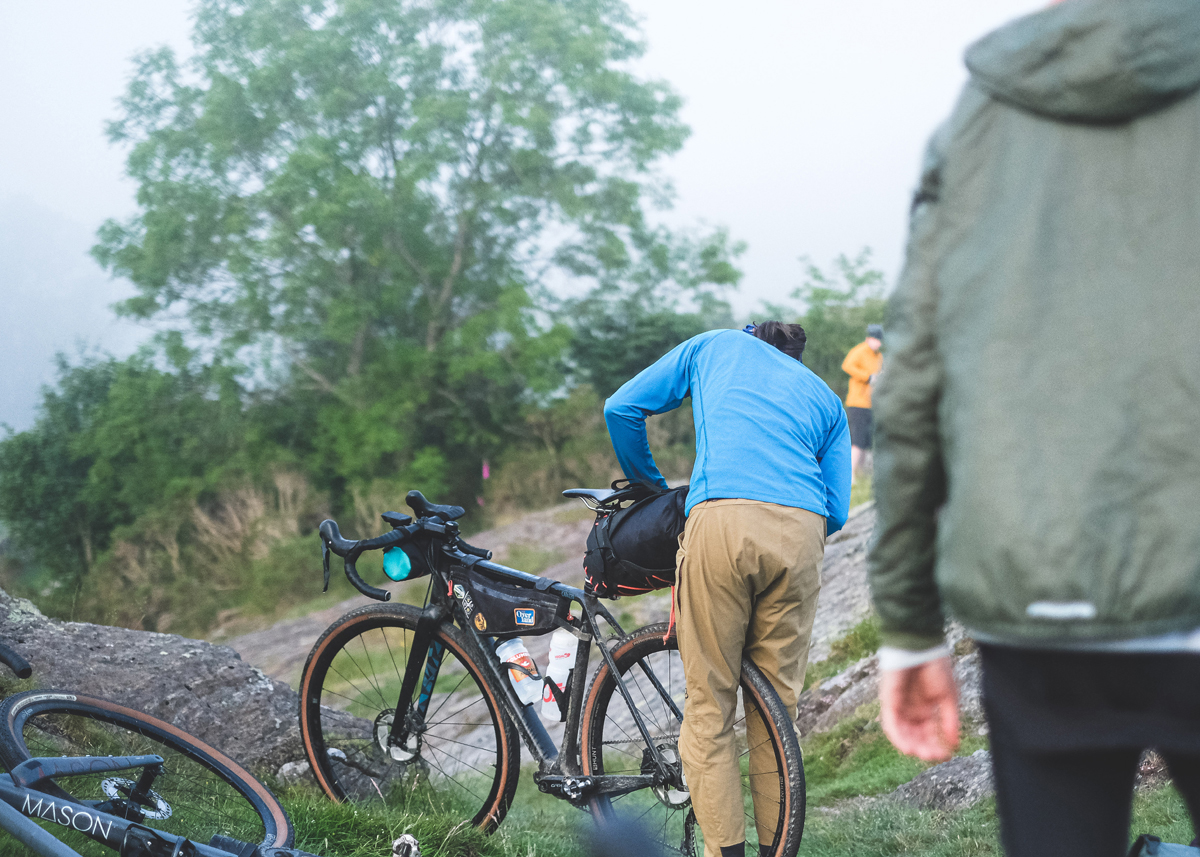 Bike light, ride fast; speed was going to be something we needed too as it turned out.

Disaster strikes! As we get to the ferry we find out it wasn’t running due to essential maintenance and were immediately forced into a 30km TT round the top of the lake to Ambleside before climbing all the way up to Windermere before and tackling some steep backroad climbs and descending down into the village of Staveley to get set for another day working at Wheelbase HQ. What I have learned from that unwelcome surprise is always expect the unexpected and make sure you’ve always got enough time if you’re potentially going to be racing against the clock! 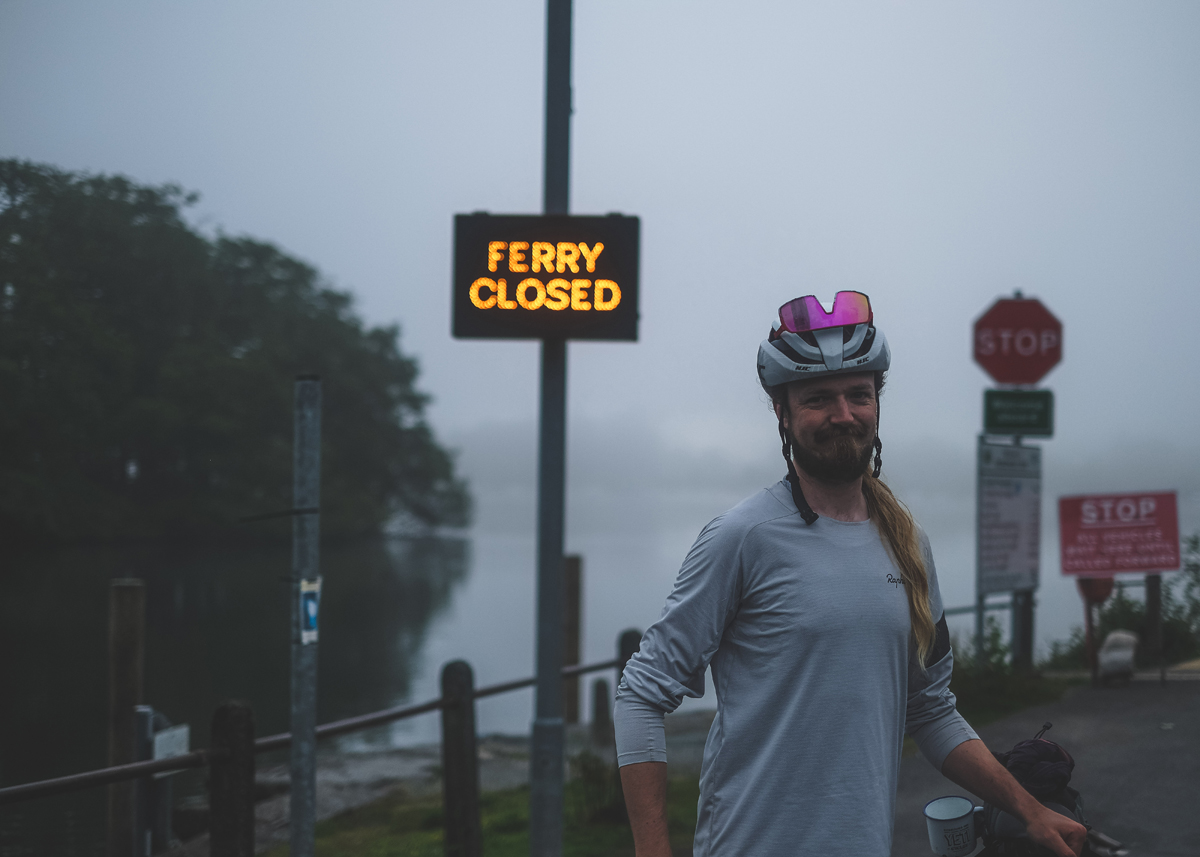 Best laid plans. We were disappointed to find the Ferry closed and quickly had to launch ‘Plan B’. 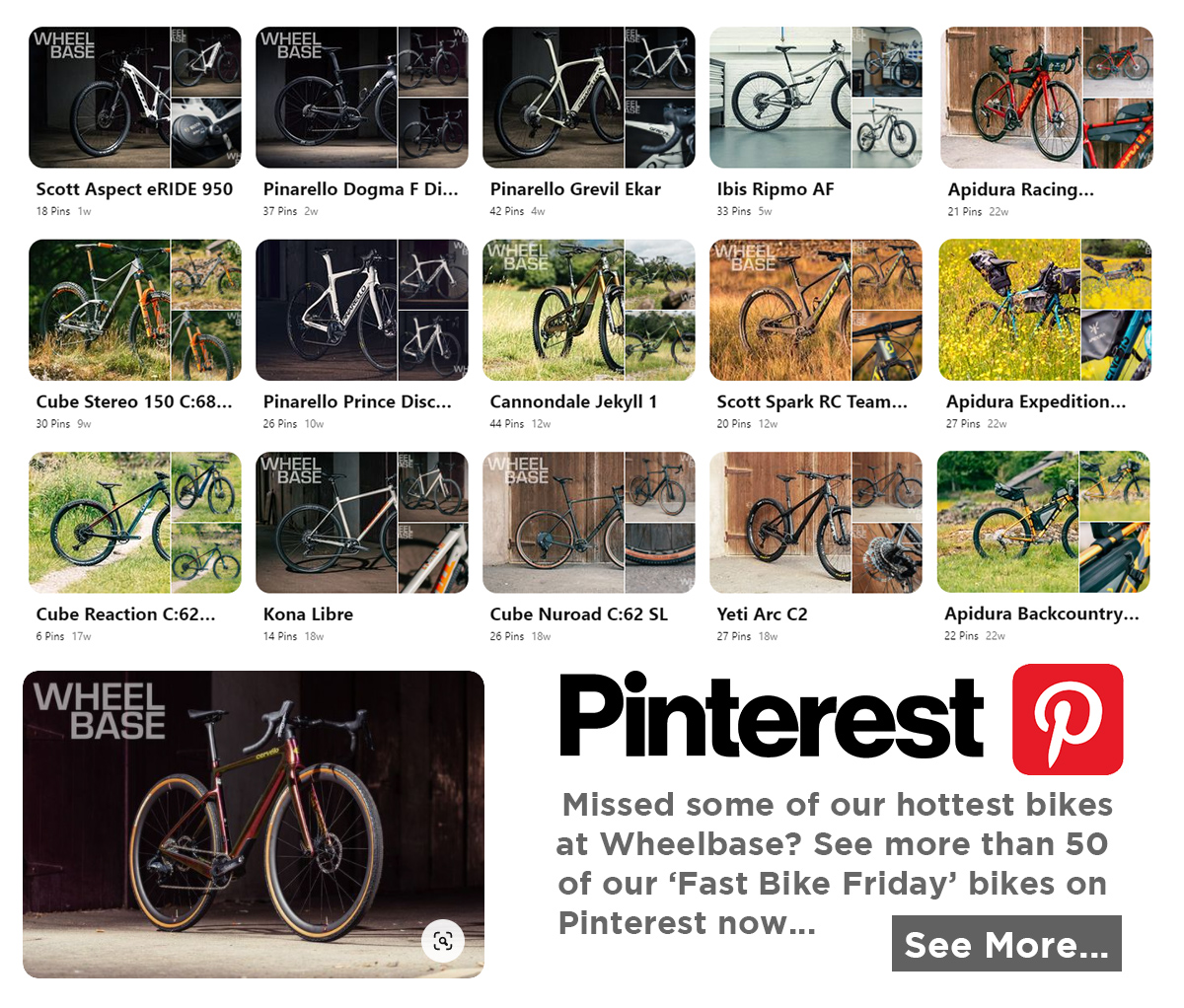